Sorter is a fast paced puzzle game where you must drag colored disks to their matching color corral. It sounds really easy doesn’t it? It’s not. As soon as you think you’ve got the hang of it, you make a mental mistake and drag a red disk into the blue corral. 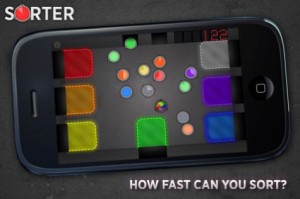 There are six different levels. The first level starts out with two colors, and each additional level adds one more color to the mix. To unlock the next level you must correctly sort 250 disks in the previous level. On a personal note, it took me over five times to get 250 just on the first level. To help you along the way there are two types of special disks, the star disk and the rainbow disk. The star disk is always associated with a color. For example, a red disk will have a star. When you corral the star disk, all of the same color disks are automatically corralled as well. The rainbow disk works the same way except when you corral it, all of the disks on the board regardless of color are corralled.

The graphics are good. They are sharp and simple, just like the game’s concept.  The sound effects and music are also nice and well matched with the visuals and the game type. That being said, the sound effects can get a bit overwhelming just because every time you corral a disk you’ll get a beep. 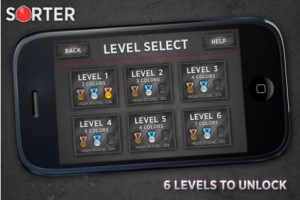 To corral a disk, you simply have touch and drag. Sometimes a good finger flip will also do the trick. Beware of accidentally touching the wrong color and flinging it into the wrong corral; a problem which seemed to be a reoccurring theme in my test runs. 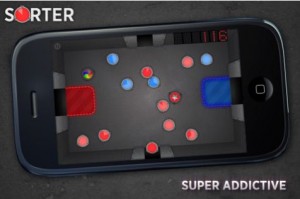 Sorter is crazy addictive because it is so challenging, yet involves such easy controls and rules that anyone can play it. I wish there were more games like this.