Disney’s latest title, Split/Second delivers an experience unlike almost any Disney game before it.  Like the action intense movies that have recently defined Disney’s Hollywood lineup, Split/Second is exciting, fast and not necessarily made for kids.  This title has the honor of being released at the same time as its console counterparts on the XBOX 360 and Playstation 3.  Having played those versions, the iPhone and iPod Touch version has definitely lost something during the translation but nevertheless is worth a look. 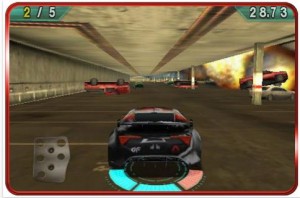 The game’s plot revolves around you being in a Hollywood style racing show.  At least that’s the plot as I understood it.  Unlike its console counterpart, the iPhone/iPod Touch version doesn’t really get into the nitty gritty details of why you are racing around a track with bombs dropping from overhead in your path.  That’s right, bombs drop in your path.  In fact, that’s where the game gets its name.  You, as the driver, need to be able to make split second decisions and maneuver quickly out of the way as competitors try any number of ways to knock you out of the race.  On the console, this works brilliantly as you can see these bombs coming and you know what to expect.  On the small screen of an iDevice though, the obstacles are extremely hard to see and often result in the obstacle causing you to crash.

The game offers 3 modes; season, quick play and multiplayer.  Unlike some other racing games, multiplayer not only allows you to race against others players via the usual Bluetooth and Wi Fi (locally) methods but also allows you to race against 4 real life players online.  It’s a nice touch but it still suffers from the aforementioned trouble of not being able to see when and where an obstacle might crush your dreams for a first place finish.  In my play time, I didn’t have any trouble with lag from the Online connection but I did have trouble during single player mode with some graphical lagginess.  More on that in a bit. 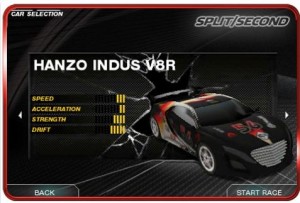 The game includes 3 tracks, 9 different tracks and 15 cars.  While none of the cars are real, they all look pretty cool and have different strengths and weaknesses depending on which one you pick to use.  The season mode allows you to play 4 or 5 maps at a time and as you unlock each, you will be able to move on to a new location.  One of the nice things about Split/Second’s season mode is that you can play the maps in any order you would like.

The graphics within the game are decently done but they aren’t anything special.  Especially considering the racing genre on the iPhone and iPod Touch is filled with some of the best looking games on the App Store.  The big problem with the graphics lay with the screen size.  It’s simply too small to see some of the minute details you need to see in order to crash your opponent effectively and to be able to maneuver your car out of the way of danger when your opponents launch their own attack.  The graphics also suffer intermittent slowdown as you drive occasionally (even though I am playing on an iPhone 3GS) so be careful before buying this game on anything less than the latest generation of iDevice’s.

The music within the game is fast paced and the sound effects are done well as well.  No surprises there, but one thing that is surprising is that the game doesn’t allow you to listen to your own music.  A game that has you playing for hours on end should have this feature by default.  Possibly it will be added in an update.

There are a few things that really make me want to tell you to pass on this game for now and one I have as yet not mentioned.  One thing that would possibly help you from crashing so much is a standard in racing games everywhere, the 2d map view that is usually shown in the top left hand corner.  This map allows you to see how far along you are on the track and also allows you to see which way the next turn is.  That map is simply not here and that lack caused me constant frustration as I continuously crashed into walls over and over again.  The only way to combat this issue is to memorize every track you race on which for me is simply not an option.  Hopefully a map like this can be added in a future update but for now, the lack of one makes me tell you to pass on this title. 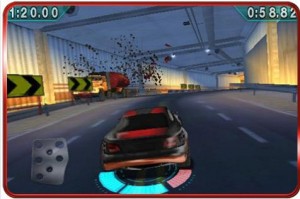 Split/Second certainly is a fun idea; cars, bombs, speed.  In the end though, it feels like a game that was rushed to get out the door in order for it to be ready for the console releases (which are extremely polished).  Hopefully Disney continues to support this game and fix it up as they go.  For now, I recommend passing and if you really need a racing game on your device, pick up Need for Speed: Shift.