Black Tie Adventure is a 2D platformer that has you, the protagonist, trying to save his abducted soon to be wife.  The name Black Tie Adventure comes from the fact that you were standing at the altar, waiting to say the I Do’s in your wedding best when the aforementioned abduction occurs.  Since you hadn’t officially sealed the deal on the wedding night, your character is extremely interested in getting his lost fiancée back.  That takes you on a quest through an extremely colorful world that has many dangers.  Unfortunately, not everything about the game is as great as its cheerful graphics. 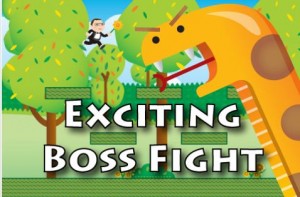 The game gives you the ability to move forward, backward, jump and use a silly looking magic wand to destroy your enemies.  You can also in Mario-esque fashion jump on their heads to destroy them.  While jumping on platforms in the forest you’ll encounter snakes, snakes in baskets and more snakes.  Too bad Samuel L. Jackson isn’t here to save the day.  As you move on in levels, you will encounter additional enemy types as well.  All in all, it’s fairly typical faire for a 2D platformer.

What doesn’t work as well is the controls.  I had several times when the controls weren’t immediately responsive causing me to miss my jump or jump into a snake causing me to die.  The game does offer two different difficulty levels (easy and normal).  I definitely recommend easy as normal is unforgiving when it comes to your death.  One single touch of a snake means your doom and a restart from the beginning of the level…argh.  Haven’t the developers ever heard of checkpoints?  They’ve been in games since the original Sonic the Hedgehog (if not before).  For me, the lack of checkpoints is as unforgiving as the snakes that kill you over and over again. 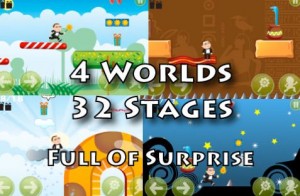 The graphics are incredibly pretty.  They are extremely colorful and make you feel as though Nintendo has made a game just for the iPhone and iPod Touch.  The music within the game is well done as well.  It is mostly composed of public domain music from classic composers but done in such a way to make you remember that you are playing a man on a marrying mission, not a spy in James Bond clothes. 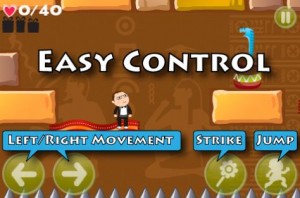 This game had all of the makings of a decent platformer.  A decent back plot as well as fantastic graphics and sound.  However, its developers forgot the two key ingredients for an excellent platformer; accessibility and good controls.  Hopefully the developers fix up the quirky controls and make some checkpoints for these levels.  Nothing is worse than creating an interesting game and having no one ever beat it because it was too frustrating to play.