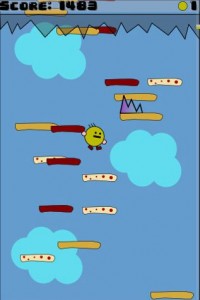 You see, you take your unnamed character and have him fall down through platform after platform.  On the way he can pick up power-ups like oranges, bananas and what looks like tea or coffee.  These things allow him to be able to continue on after falling against pokey like obstacles that take away his life.  Doodle Fall, ahem, I mean uFall also has an impending threat from above that chases you down in your descent.  A huge pokey like structure continues to chase you trying to destroy you.  As you fall, several platforms contain things that make your character hop up towards the large pokey ceiling.  If you touch the ceiling, you die. 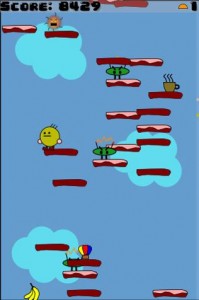 The game itself isn’t too bad but my problem is the way the developer ripped off the entire gaming element of Doodle Jump.  The worst thing is, they didn’t even copy it well enough to make it as fun.  There is one single score that is kept for your best score and that score was wrong for me after I played several times.  There is no leader board, no way to connect and look at other scores, and generally the only thing you can do is share this rip-off with your friend.  I say pass on this one.  Hopefully the developer abandons this game and comes up with a unique idea for his next game.