Buckle up, strap in, and prepare for the ultimate flight from New Zealand to the United States with our lovable hero, Kiwi. While guided by his crotchety, yet knowledgeable grandfather, the young bird pilot sets out on a mission to reach the shuttle launch, inspired by events captured on television. We take the journey with him, saving thousands of dollars to purchase new flying machines, abilities, and special equipment to complete the mission. Wonderfully cartoony and surprisingly addictive, Hungry Game hit the nail on the head with Fly, Kiwi, Fly! 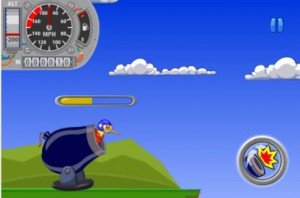 I’m immediately impressed by any game for $0.99 which manages to hold my attention for longer than about five minutes or so. While it took some patience to become acclimated with the controls, I was quickly hooked on flying around with Kiwi using kites, gliders, and rockets. On each flight, you launch Kiwi off a cliff, and attempt to make it through the different countries, while collecting money, fuel, and performing various stunts. It’s actually much tougher than it sounds, and took me nearly 40 flights just to get past the first four nations.

While amassing a large stash of loot, you can purchase different power ups, as well as propulsion and flight devices. Kiwi starts with a measly kite, which sends you crashing to the ground before even making it out of his home country of New Zealand. Over time, you can end up with cannon launchers, missile boosts, and jet engines, which send Kiwi hurdling through the air into space at breakneck speeds. There’s also a variety of achievements to unlock, which increase with difficulty after each stage, delivering large cash prizes upon completion. 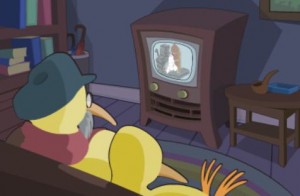 Fly, Kiwi, Fly! uses a fairly cartoonish graphic design, enabling the game to run super smooth with a minimal amount of glitchy interruptions. The menus are organized nicely, broken up into a user friendly layout. During game play, all of the necessary instruments are in the top left corner, allowing you to monitor speed, altitude, distance, and fuel. The backdrops change with each passing country, as well as height, which can range from cloudy skies to deep space.

Each menu features its own musical track, which seems to fit the overall cheekiness of the game. There are pleasant cash register noises when securing a bag of money, and rocket blasts while shooting off into the stratosphere. The in game music is also unique, keeping the momentum moving during each flight. Similar to many other titles, Fly, Kiwi, Fly! allows you to adjust the different volumes, or completely turn them off.

While the options allow calibration and customization of the controls, it still takes a little time to work out the kinks. The device needs to begin fairly flat, and as you tilt back and forth, Kiwi responds accordingly. If turning too far vertically, the speed drops out quickly, and negatively impacts the rest of the flight. Finding the delicate balance between too much and too little isn’t easy, but makes the game challenging without completely driving players insane. 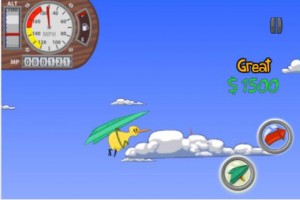 If you’re in the market for a fun, entertaining, cheap iPhone game, Fly, Kiwi, Fly! is a complete bull’s-eye from Hungry Game. For $0.99, you really can’t ask for any more, and I had a difficult time trying to put this one down once I started to figure out the controls. Performing the tricks is a little quirky, as many times it seemed like they weren’t registering correctly, but that’s a fairly minor issue. Pick this one up, I guarantee you won’t be disappointed.