The rhythm series that started the genre in the first place finally comes to the App Store platform.  Since the ubiquitous series started out 7 years ago, we have Guitar Hero come to almost every mainstream platform including the DS and the PC.  It was only a matter of time before it made its way to the iPhone and iPod Touch.  Perhaps no platform brings more challengers to Activision than the App Store yet Guitar Hero still manages to succeed and even surpass its competition.  In fact, in some ways it leaves them in the dust. 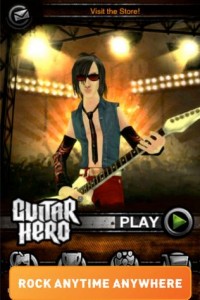 It’s hard to think of an iPhone based rhythm game without mentioning Tap Tap Revenge and the rest of its series.  Guitar Hero has all of the flare of that series and much more.  On the 3GS you’ll see fully motion captured graphics that depict your star playing guitar.  For the users without a 3GS (or a new iPhone 4), you’ll see pictures flash by every few seconds on the background.  Your character can be totally customized within the game.  As you unlock achievements, you also unlock additional outfits and accessories for your character.  One of the things this game does best is put you in it.

When it comes to music, the game has several good choices for you to play with by default.  Unfortunately the worst thing about this game is its lack of built in choices.  You’ll only find 6 songs in the game when you first download it to your iDevice; slim pickings indeed when compared to Tap Tap and Rock Band.  That being said, the choices you do have are quite good and include artists like Rolling Stones and Vampire Weekend.  Of course you also have the option of buying additional tracks on the built in music store. You’ll find a whole host of additional music on the store including Queen and indie bands ranging from folk rock to heavy medal.  These tracks are sold as a set of 3 and go for $1.99.  Unfortunately you aren’t able to use the tracks outside of the game.  Nevertheless, you’ll find the quality of track and the note chart used for different difficulty levels both of high quality. 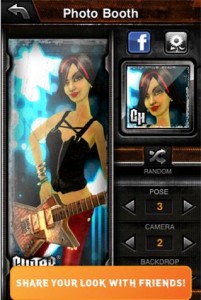 The standout features for this game really are its achievements and innovative controls.  The game gives you and incredible number of achievements’ for you to unlock.  Each time you play a song, any song; your character will become better and in a nod to an RPG, will level up.  Another feature sure to please those entirely bored with the simplistic method of playing Tap Tap or Rock Band on the iPhone, Guitar Hero includes 2 new controls for combining notes.  Guitar Hero treats certain notes as strums and makes you slide your finger back and forth to emulate the strumming movement.  It may sound like a simple change but it surprisingly adds a lot and a whole new dimension to the game. 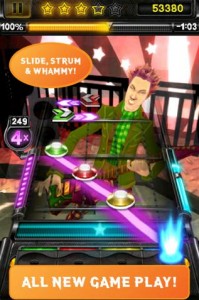 All in all, Guitar Hero brings everything you liked about the series on a console to the iPhone and iPod Touch in a fairly effective manner. At $2.99, you will be getting a solid music game; albeit it without many songs to play.