Jake is known throughout the god-fearing world as what game they have to play when they are bad.  Or at least it should be.  While the basic gameplay itself isn’t too offensive, albeit extremely repetitive, the sound as well as the lack of any innovation causes this game to be more annoying than fun. 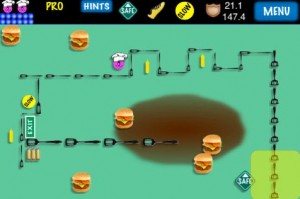 Jake is a circular shape face of the purple persuasion.  Your goal is to tilt your device through a maze and obstacles in order to get to a completion point.  Basically it’s a lot like Labyrinth (the famous maze game for the iPhone and iPod Touch) with cartoon style graphics and unfortunately a much worse physics engine.  Even a small tilt of the device causes Jake to go tumbling into an obstruction making him go through the entire maze again.

I gave this game a fair shake, as I do with any game I review.  In other words, despite the fact that this game was clearly not for me from the start, I played it a pretty decent amount of time even climbing to the double digit levels.  That may sound simple despite one thing, the sound.  The sound is simply horrendous on this one.  I think the developer had his kid record a few catch phrases to be played after you run into an obstruction or get shot by some of the other characters but the phrases are repeated entirely too much and considering how many times you die, quickly become annoying.  Sure, you can turn this off but the game also lacks any music and unless you want to listen to your own music, the sound on this game is a complete dud. 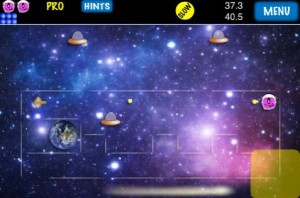 The game offers up Jake several power-ups to make his missions easier though none of them are what you might call “cool”.  One lets you shoot, another lets you slow down the moving characters on the map but all in all, these power-ups are in no way comparable to a competing tilt game like Tilt to Live.  The only thing that really changes from stage to stage is the background and maze.  Some are more difficult than others and the backgrounds being varied for each level is a nice touch.  However, that doesn’t fix the game itself which is really the main problem here. 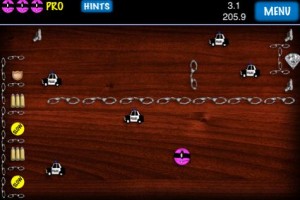 The game itself will just feel blah while playing it.  There is no excitement built by getting past the obstructions because if you even get near an opposing organism on the level (the collision detection is questionable), you will instantly restart the level.   It would have been better to have multiple checkpoints as you progress but even that wouldn’t save this one.  There are simply too many other better games in this category and despite the effort to inject humor and variety into the game, it falls flat.