Inspired by the real life group of mobile racing enthusiasts, Rocket Racing League straps players into a virtual unmanned racing unit for a wild series of twists, turns, and breakneck speeds. A departure from the futuristic and wartime dog fighting titles, this is built around more traditional racing modes such as arcade, drag, and laps. With gorgeous 3D backdrops and a pulsating soundtrack, Rocket Racing League is tough to beat for the next best high powered issue in speedy competition. 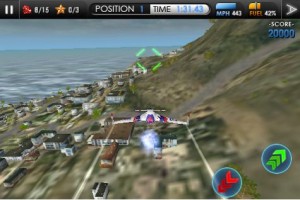 With fully online multiplayer capabilities, an extensive career mode, Wi-Fi abilities, and five track locations, Rocket Racing Inc. generated a pretty deep game for the $2.99 price tag. While battling your way through the career, each track has four different modes to conquer, with different achievements, hidden items, and more than enough difficulty to keep you busy. Customizing your ship can become pretty crazy as well, as nearly any piece can be splattered with every color of the rainbow, and unique decal packages are unlocked with each completed challenge.

Rocket Racing League easily connects to a worldwide scoreboard as well as Facebook, so you can feel free to challenge friends and other mobile gaming warriors to beat your time consuming records. After a particularly impressive run, there’s also an instant replay option, allowing you to cycle through six camera views while reliving the heart pounding action.

Each distinct level carries its own vibrant colors and skylines, with deliciously rendered landscapes for you to navigate at speeds reaching 600 miles per hour. Nevada and California are particularly dazzling, with golden and auburn mountains, stark blue skies, and obstacles threatening to wreck your expensive craft at nearly every turn. While selecting your cruiser’s color scheme, the game interprets everything accurately, with hardly any glitches or hiccups which seem to occur far too often with similar titles. 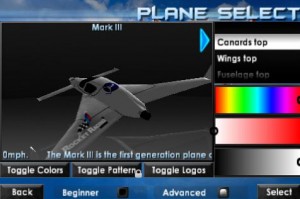 To match up with the adrenaline laced racing action, Rocket Racing Inc. delivered a pumping soundtrack, filled with heavy riffs, double bass drums, and an overall straightforward rock experience. At times it was almost slightly silly sounding, but it was easily preferable to the obnoxious drum and bass electronic headache which frequents similar games. While accelerating or hitting the turbo boosts, the engines whistle away as your craft bursts ahead of the competition, coming though clear as day.

There are two distinct control options, with a number of calibrated features to allow players the maximum amount of ease while rocketing under bridges and over hillsides at high torque speeds. The accelerometer is the familiar system of tilting your device to control the aircraft, along with a brake and gas button. If this isn’t working out, feel free to attempt the virtual joystick, although this lasted about three minutes with me before I was ready to throw my iPod across the living room. However, I’m sure some people will find one is better than the other, and the amount of customization involved makes it slightly easier to get the hang of everything. 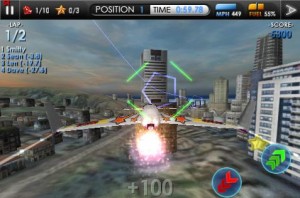 Challenging, fast paced, and wonderfully visual, Rocket Racing League is an entertaining mobile adaptation of the real life competitions (which I never knew existed until playing this). The control has the capability to frustrate some players, but some practice will make things plenty easier over time. Amidst an avalanche of racing titles in the iTunes Store, Rocket Racing League is one which is actually worth the price tag.