Soccer games seem ubiquitous during this year’s World Cup.  However, it may just be because it’s the world’s most popular sport.  This game comes to us with a bit of a different take than the others we have reviewed.  In fact, Football Agent could just as well be called stock market trader or baseball agent.  Though it has a soccer motif, it’s really about buying low and selling high and doing so as fast as possible.  I like the idea of the game but as someone that lives for the details, I was disappointed in how few there are. 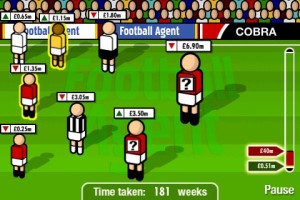 The game revolves around graphically represented soccer players being presented to you.  In the beginning you have 2 Million Pounds to buy and sell with as you wish.  Most of the players in the beginning will cost more than you have so your choices are limited.  Each player is outfitted with a full kit (Americans, read: uniforms).  Your job is to buy a player by tapping on him.  By doing so, he is selected in a gold outline.  His value goes up or down constantly and time continues to run.  Now the hard part; knowing when to sell him before his value begins falling too much.  Once his value does begin to fall, it never goes back up. 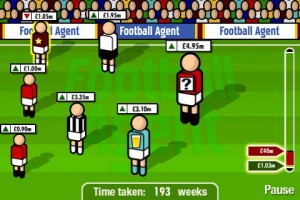 New players are constantly being introduced on the playing field due to the fact that when a player’s value begins dropping, it will inevitably drop to zero causing a new player to replace the old one.  Similarly if you sell a player, a new player is introduced.  The actual gameplay mechanic works well and is modified a bit due to one of 3 values that can be shown on a potential player’s jersey.  Occasionally you will see a star, beer or question mark on a jersey.  All 3 of them give you a little better idea of how well the player will rise or fall in value.  The game lasts for 200 weeks which in real time is about 5 minutes or so from what I could tell.  Your object is to make the most money as possible during this time period. 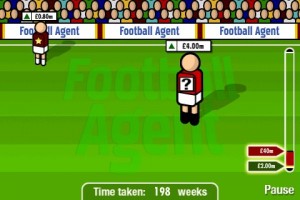 My real problem with this game is a lack of feedback.  While it is fun to buy and sell these players and occasionally overwhelming (you can buy as many players at a time that you have money for), there is no way at all to gauge yourself to the rest of the world.  I made 41 million pounds in one game I played; yet there is no social network like OpenFeint, Plus+, or any of the vast number of other networks to help you figure out if that score is any good.  Heck, there’s not even a local high score board which for a game like this feels absolutely mandatory.  There are a few nice touches here and there (I particularly like that players wearing the same kits give you a bonus for selling them at the same time) but there really is not enough here to sink your teeth into.