Beast Flyers is an action RPG where the object of the game is to gather the shattered pieces of the Crystal of Eternal Aura. The problem is that when the crystal broke, the animal spirits of energy escaped. As a Beast Flyer, your responsibility is to fight the evil spirits and collect the crystal pieces. 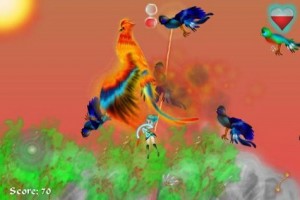 The game is set up with an in depth RPG storyline that includes chapters and researchable objects and spells that once unlocked can be used in battle. As a Beast Flyer your mode of transportation is connecting to a flying animal. You can switch animals at any time by lashing out and grabbing another one. The act of connecting from one animal to another also builds your health.

You can unlock/research a number of weapons but the ones you start with are a sword and throwing knives. You can select two weapons before each level so you can mix and match. During the level you can switch back and forth between the two by simply tapping the appropriate icon at the bottom right of the screen. However this leads me to one of my big complaints. If I’m using throwing knives for example and I’m tapping like crazy trying to throw as many as possible the sword icon seems to always get hit. The weapon icons are in a bad location especially when you are in the middle of getting attacked. 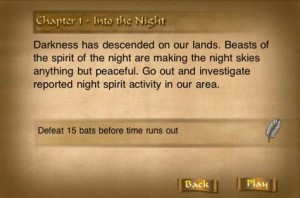 The levels seem to be very repetitive, with the only thing changing are the animals in that level. One level has birds, the next bats, same level different enemy. In between each battle level there is a level where you must fly around and collect pieces of crystals. This every other level theme seems to carry out throughout the game. 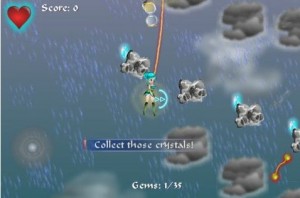 The in game graphics are good, but the menus and story set up graphics are bad. They are hard to read and some are very bright and busy and others very plain. The music on the other hand, in my opinion, is really good-almost epic. It has a Middle Ages quality to it that seems to fight the concept of the game. Beast Flyers is a good concept but doesn’t bring all of the parts together. The bad controls and repetitive levels are enough for me to say pass for now.