Jab. Jab. Hook. Boxing games have always been around but most have been a swing and a miss, pun intended. Down 4 the Count, from the developers at Astraware, is not one of those games. With style that is similar to the best boxing game of all time, Mike Tyson’s Punch Out, but also superb controls and gameplay, Down 4 the Count is a hit. Yes, also intended. 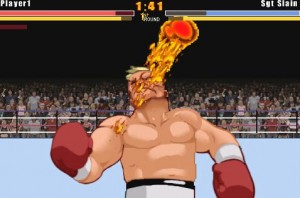 Like all boxing games, you start out fighting wimps and advance your way up through the ranks. Every fighter gives you a different challenge and every fighter has a different weakness. The first two or three fighters are pushovers. You really just use these early fights to get the controls figured out and get comfortable with the game.  Once you progress to the fifth and sixth boxer, look out. These guys take some real strategy to beat. Personally, I’m still on the seventh fighter and he’s giving me hell, usually knocks me out in the first round.

The controls are the best part of the game. With boxing there are so many different punches you can throw and usually with videogames you are limited to how many of those you can use. Well in Down 4 the Count you aren’t limited. Everything is a tap or a slide. Basically all you have to do is tap where you want to hit your opponent.  To throw a low left jab, tap the boxer in the stomach on your left. To throw a high right jab, tap the fighter on the left side of his face. You can also throw hooks by sliding your finger into the fighter’s head. 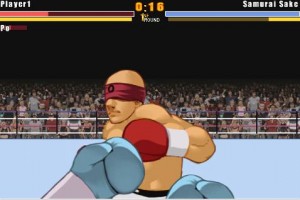 Defensively you have two choices, you can block or dodge. To block all you have to do it is hold both of your thumbs on the screen. Hold your thumbs low to block body blows and hold them high to protect your head. To dodge a punch, slide from the middle of the screen to whichever side you want to move.

Aesthetically, Down 4 the Count reminds me of a Nintendo 64 game.  The quality isn’t bad but the way the characters are drawn and the movements they make are old school. The gameplay graphics could be better but overall serve the game very well. The menu screens are simple and play into the old school theme of the game. The music consists of a basic looped beat, but you can choose from your own music library and create a boxing playlist that will put you in the mood to kick some ass. Eye of the Tiger anyone? The in game sound effects are pretty basic punching sounds. You also get crowd noises and of course a ringing bell. 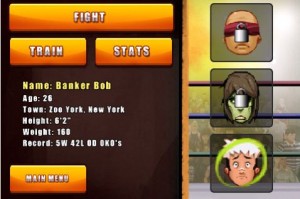 Down 4 The Count is well worth the $1.99 price tag. I’ve been playing it on and off for a few days now and I don’t plan on deleting it from my phone anytime soon. I really like the massive amount of available controls. Being able to maneuver and punch in so many ways is the best feature of the game.