We’ve all seen and most likely played the old arcade games with the gun and the targets that pop up on the screen. Well Police Range is exactly that but for your iPhone. The game has two modes; Target Practice and Crime Alley. 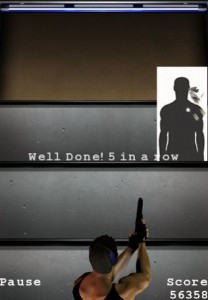 Target Practice delivers you to a shooting range firing at silhouette targets. In the beginning, the targets slowly pop up giving you more than enough time to tap the target (tap to shoot). As you keep passing stages you will find that the targets start to pop up faster leaving you with less and less time to react. In Target Practice you get different amounts of points depending on where you shot the target. Kill Zone shots give you the most, Card Shots give you the least and Body Shots are in between. Each stage adds more targets and also increases the accuracy needed to move on. I honestly don’t know if there is a final level. They could just go on forever increasing the speed of the targets until it would be physically impossible to pass.

The Crime Alley mode is exactly like Target Practice but instead of having to shoot all of the targets, some pop ups are civilians and you obviously don’t want to shoot them. Like Target Practice as you move on to more stages the difficulty increases and once you fail a level then the game is over. A thing worth mentioning is that in both modes as you hit more and more targets in a row, your gun upgrades and makes more damage on the targets. 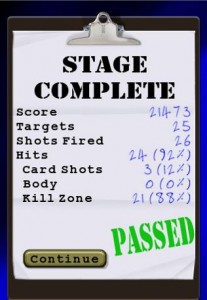 From an aesthetic standpoint this game is very simplistic. The graphics are not high quality and the only sound effects are gunshots.

With that said, during gameplay you really don’t have time to take in the view. You are way too busy reacting, so the lack of good graphics doesn’t bother me a lot, but it still bothers me. Music would be nice, even if was just in the background on the menu screens. 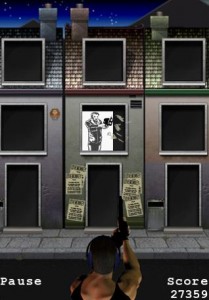 Even though Police Range is a basic game, it is still pretty fun for a while. The amount of gameplay is virtually endless. If you are a fan of gun range games then Police Range is worth looking into, however, if you are not a big fan of this type of game, I would pass.