Slap Word is basically an 11 level word search game without rules when it comes to making a word. You can go forward, backwards, and diagonal. This is starting to sound like the Wonkavator (Editor: For those not in the know, that’s Willy Wonka’s magical elevator). You can go in any direction at any time as long as the letters are connected (this isn’t entirely true but for the sake of the game it is). You can even jump over letters you have already used. It’s honestly a no holds barred word search game. 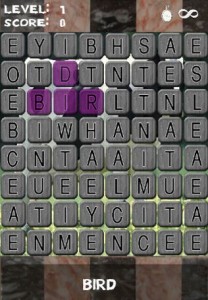 Each level has a different difficulty. The first level for example doesn’t have a time limit, just a score limit. The second level has pop-ups that say you must spell a word backwards, or a word that starts with a “t.” The third level you must only spell colors and so on. You get the drift.

Slap Word is unpleasing on the eyes and ears. The backgrounds and graphics are unprofessional. There’s no apparent theme, visually or audibly. The music is a single song that’s constantly looped during menus and gameplay. The sound effects, the two I counted, are overused. With every move you make you will get one of those two sounds. Which by the way are the same sounds used in the menus. 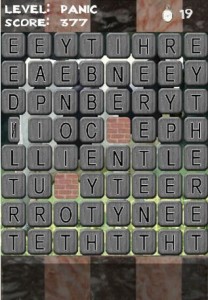 The gameplay controls are totally tap and drag based. But the letter tiles are so small that you experience difficulty dragging out the word you want. Many times, my tap and drags weren’t even registering on the game board. Remember what I said above about the letters having to be connected? Well, I made it to level 6 and was getting uninterested so I started sliding my finger around the board in no particular order and what do you know? The game was actually picking up words from letters that weren’t even connected, not even close. I passed the level in record time. Oh, and you can move tiles around by tapping and holding, then selecting another tile. Where’s the fun in moving tiles so you don’t have to look for words? 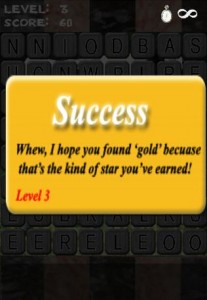 There really isn’t anything that I like about this game. The controls are bad. The graphics and audio are bad. The overall game concept is all right, I guess. If you are still interested (and obviously don’t respect my opinion at all), Slap Word is $0.99.