Tunnel Shoot, a joint effort from Backflip Studios and Team Phobic, takes you on a fast paced space ride through a tunnel.  The only way to make it out alive is to battle your way through the endless swarm of enemies in your way.  Strike that, you can’t really make it out alive.  You just keep going until you eventually lose.  Nevertheless, the end result is all about the journey.  This journey is a bit of a hit and miss. 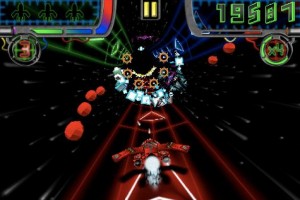 The game revolves around you flying your ship through an enclosed tunnel.  You have the ability to move left and right, shoot the enemies in your way and occasionally use a special weapon that blows them all away.  The real difficulty comes in by making quick decisions in order to avoid the obstacles and enemies in your way in whatever manner necessary.  That means tilting your iDevice until you are on the ceiling of the tunnel (barely dodging the obstacles in your path) and shooting down the enemies in your way.  That part of the game can become fairly challenging (and fun), and becomes more difficult the farther along you go.

You start the game with 3 lives and gain points depending on many of the enemies you can strike down.  The game is connected to the social network, plus+, so you can compare your score to your friends and there are also close to 15 achievements you can earn.  This is one of those games you will never beat so its long term replay value is dependent on whether or not you are the type of person that keeps going back for the highest score possible. 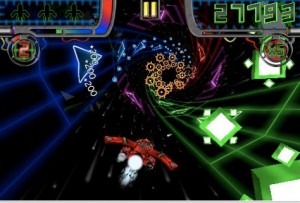 The graphics within the game are decently done although nothing too fancy.  There’s no ability to customize your ship or its abilities in any way.  The music within the game is upbeat and lively and the sounds are satisfying laser fire.  All in all though, the aesthetics of the game are just so so. 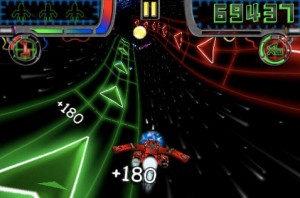 It would have been nice to have more than just a straight point system for flying through the tunnel.  I can imagine timed races, missions, etc that just aren’t found within this game.  It just feels a bit watered down and lackluster.  If the game is updated with more content I would be happy to recommend this one but for now I would look to something more full featured.