Having played a lot of games on the iPhone and iPod Touch, I am always surprised when I find a game that can be entirely unique and stand out from the crowd.  Bowmaster meets both criteria and left me wondering why no developer had thought of a game like it before.  Nevertheless, iOccam has come up with a great idea and better yet, delivers an excellent game. 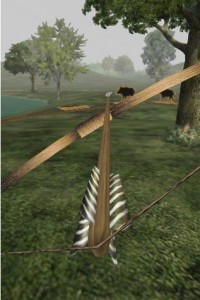 The game puts you in the role of a Robin Hood-esque bow and arrow master.  In this role, you compete with different masters of the bow that range in difficulty and skill.  Your mission, shoot at targets shaped like animals that are moving through the vast landscape.  The landscapes are indeed vast and they are also nice looking.  Though difficult, this game offers a challenge that can be overcome.  Meaning that this game will take a while to win but the effort you put in will show noticeable results.  You will get better as you continue to play and the fun only intensifies in later stages.

Each of the competitors in your bow and arrow meets will be shooting at the same time at the same targets as you.  You are thrust into first person view.  Unfortunately, you have no ability to just turn around and shoot your competitor; you will really have to have some ability to win these tournaments.  The game starts things out easy with targets that stay still and are close.  As you progress to tougher competitors, you’ll also find that the landscapes you move on to make things tougher as well.  They will include rolling hills, water, and in the final stage; catapult thrown birds (which are incredibly tough to hit at first). 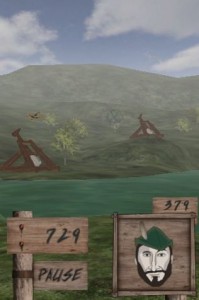 The controls are brilliant.  In the motion of a real life bow and arrow system, you take one finger to steady your shot and take another finger and pull back your bow.  When you are ready, let loose your arrows.  The end result is an incredibly satisfying hit or a disappointing miss.  Since you are racing your competition on the same targets, a miss can mean the difference between grabbing the points for yourself or your competition taking that target while you reload your bow.  The frantic gameplay is both tough and a lot of fun. 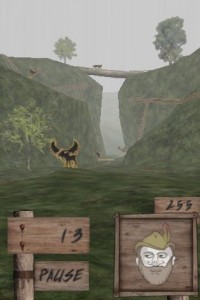 The graphics and sound within the game are both well done.  Seeing your arrow fly hundreds of feet and hit a moving target in wonderful (and remember that no real or virtual animals are killed in these competitions).  The game comes with 5 levels which include different backgrounds and a different competitor in each.  It would have been nice to be able to mix and match your competition once you beat the game but even the gameplay included is sufficient for Bowmaster to be a must buy.  The physics, graphics and controls all come together in this one and make it a bull’s-eye.