While we aren’t there, we will be pulling in information from people who are.  Nothing better than third party information, right?

1:04 PM ET Room is about half full.  Not bad for a conference that was just announced yesterday.  I wonder if Jobs will even be here?

Are you kidding me?  The YouTube song, The iPhone Antenna Song is being played.

Steve has come out.  Going to give a 15 minute presentation

Steve says that Apple loves to make people happy.  This is the best device Apple has ever made.  3,00,000 sold.  Tons of media outlets have liked it. 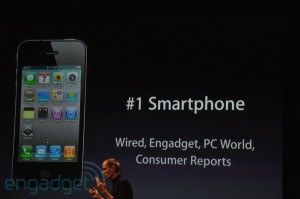 Steve is going through comeptitors and showing how their phones drop bars by pressing them in similar ways to the iPhone 4.

“Antennagate — that doesn’t seem like a good thing if you can make the bars go down by touching the phone. Well we first learned that this doesn’t just happen to the iPhone, Nokia, Motorola… other phones have this issue. But we didn’t trust the videos on YouTube, we started doing our own testing… here’s what we discovered.” 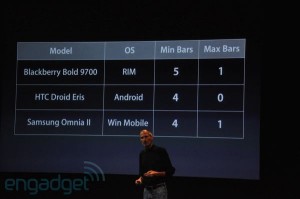 It sounds like Steve is saying that the main problem is they made it too easy to see the exact spot on the phone you should not touch (the black line on the left).

Steve says they haven’t found out a way to beat the law of physics yet.  they said they did a tremendous amount of testing on this device. 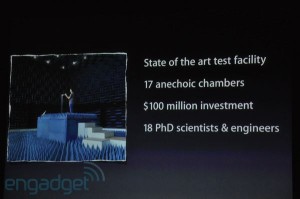 Steve says, “So what have we learned? Smartphones have weak spots — this isn’t just the iPhone 4, it’s all phones. Next, some really interesting data from AppleCare, we looked at the statistics, we asked what’s the percentage of all iPhone 4 users that have called AppleCare about the antenna or reception, or anything near reception problems. Because you would have thought ‘Jesus, it must be a lot of users complaining about this’ — So what percentage have called AppleCare? 0.55% Just one half of one percent.”

He didn’t say it but that means over 16,000 people have called to complain.  Still seems like a lot.

Less than 2 % of early shipment iPhone 4g’s have been returned.  The iPhone 3GS has a 6% return rate.

“Even though we think the iPhone 4 is superior to the 3GS antenna… it drops more calls per 100 than the 3GS. We’re being transparent. So how many more does it drop than the 3GS?”

Editor: Obviously it’s not better if it even drops one additional call, right?

Steve says it drops less than one additional call per 100 based on AT&T’s hard data.

His pet theory.  Only 20% of iPhone 4 buyers are leaving the Apple store with a case.  The old phone (3GS) looked like the 3G and 80% either bought a case or had an old one to use.

Editor: Is this leading up to us getting a free/discounted case?

1:30 PM
A free case is coming to you.  Steve says, “”We think this has been so blown out of proportion… it’s fun to have a story, but it’s not fun on the other side. So here’s what we’re going to do to make our users happy. The first part is the software update, that fixes the way the bars report and other bugs, that’s out now. Second, people said the bumper fixes everything… ‘why don’t you give everybody a case’? Okay — we’ll give you a free case.” 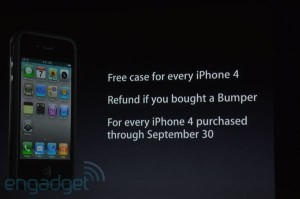 Steve says that if you are not satisfied, you can bring back your undamaged iPhone 4 and we will give you a full refund with no restocking charge. 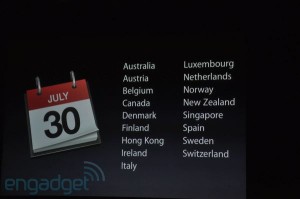 Ryan from gdgt: You showed people almost covering the entire phone in their hand [when you showed competitors phones], but on the iPhone 4 it can happen with just a touch. Can you explain that difference?

Editor: I don’t see the difference…

Several additional questions are asked but there are no more answers to be had.  Looks like this will be the same design used for the white iPhone 4 and that they don’t think there are any specific problems with the way the phone was designed.  AT&T contracts will also be refunded if you get a refund on your iPhone 4.

One more thing, Steve called Bloomberg’s article that Apple knew there were problems with the phone before it was released, “total bullshit'”  Haha.

Thanks to Engadget for the pics used within the article.