Alright, so you’re searching for the latest golf game with just the right amount of realism, but not so mind bogglingly complicated you feel as if you’re actually standing under the burning sun at some course you paid far too much for the privilege to play on. If you play one more round of Wii Golf you might lose your mind, and purchasing the latest Tiger Woods title just sounds unsavory on more levels than one. Welcome in The Old Course with open arms, a golf game which seems to understand the delicate balance between realism and obnoxiousness. 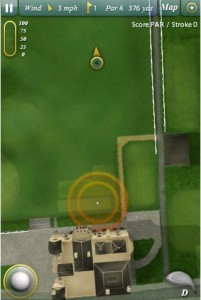 Right off the bat, everyone has to recognize the super cheap price tag on this beauty. Anything which lasts for longer than a half hour for 99 cents is already on the verge of becoming a winner, but The Old Course appears to far surpass this on the surface. A detailed tutorial kicks everything off, urging you to learn how to properly use the controls before criticizing how the game works. Afterwards, feel free to engage in a number of play options, including practice, match play, single play, or compete against friends via wireless networks or by passing the device around.

Everything is fully rendered in smooth 3D, avoiding looking cartoonish while aiding in the game’s realism. Lush, vibrant green courses are clearly divided into fairways, greens, roughs, and sand traps, with out of bounds markers, water, trees, and buildings all painted in around the playing area. A menu bar runs across the top detailing wind conditions, distance, and scores, with club options placed on a rotating wheel in the bottom right hand corner. After striking the ball, the overhead camera angle follows quickly as you (hopefully) soar past trees and sand traps, landing snuggly onto the fairway. 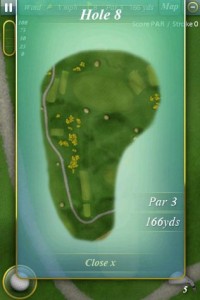 Okay, drum roll please. Cobra Mobile added in an option which allows you to play your own music while on the course! Oh my god! This option alone almost makes me want to jump for joy like a kid on Christmas morning, as an alarming ratio of publishers nearly always leave this out. If you prefer to leave everything alone, The Old Course has a soothing, jazzy soundtrack which does its best to keep your nerves at ease, even while hacking away Billy Madison style at a ball stuck in the rough behind a tree. The clubs make a popping iron-on-ball sound while swinging, which emulates the effects usually heard on television pretty well.

While strolling around on the course, the game utilizes a method which requires you to pull your finger back over the ball, then whip it forward with varying force to control the distance of each shot. A certain finesse is required to keep everything under control, so this might take a round or two to become comfortable, but it’s by no means outside the realm of reasonable expectations. Putting and chipping can be tougher, as it’s more about the distance your finger travels, rather than the velocity. The Old Course also has a built in “Aftertouch” mechanism that allows you to alter the ball’s path by tilting the device. Going too far? Tilt backwards. About to sail right off the course? Tilt the opposite direction. As for people saying “Dude you can’t do that in real golf!,” this can be toggled off in the options menu, so take a deep breath. 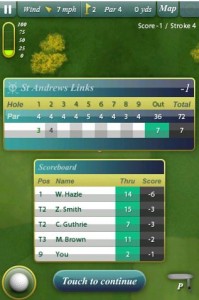 Cobra Mobile set out to create an entertaining golf game which maintains a certain amount of realism, without requiring players be experienced in the various nuances and quirks of more advanced golfing. Striking a nice balance between mini golf and the PGA Tour is pretty difficult, and it seems like The Old Course is a great compromise. This is coming from someone who doesn’t even particularly like golf, so fans of the genre might enjoy it even more. Plus, you can use your own playlists and it’s only 99 cents. What are you waiting for?