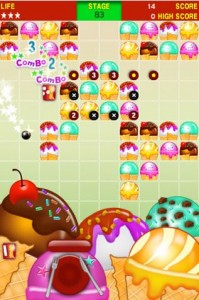 FoodBreaker is, as I’m sure you can tell by the previous paragraph and the game’s name, one of those variations of BrickBreaker. However, you don’t break bricks! You break food. Didn’t see that coming, did you?

The gameplay has you controlling a paddle at the bottom of the screen with your finger, trying to bounce balls back up to the target icons.  The icons in FoodBreaker (you can choose from six themes) include hamburgers, tomatoes, ice cream, cake, normal blocks, and finally a mixture of them all.

As you play a level you will notice little red cards falling towards your paddle. These are special items that affect the game. For example, one makes the ball move faster, one shrinks your paddle, one makes it grow, and so on but you get the idea. FoodBreaker uses the standard specials that you find in so many games of this type. 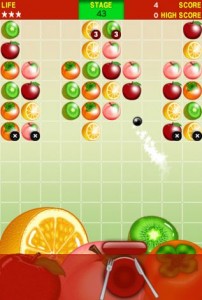 FoodBreaker’s graphics are probably the best part of the game. They are crystal clear and are extremely vibrant and detailed. The audio on the other hand is almost nonexistent. The only type of audio at all is a few chime sound effects that occur during gameplay when you hit a target icon. Luckily, you can turn the sound FX off entirely and listen to your own music. 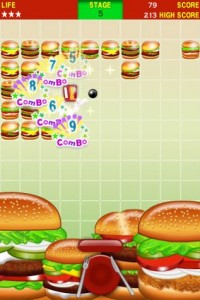 All in all the game looks good, but it’s still just a BrickBreaker game with a small twist.  To me though, it feels like a game that kids would like. The controls are easy and the levels are not too hard. At $0.99, its price is at the bottom of the totem pole so if you really like games of this type, check it out.