Malum Umbra is one spooky, unusual ride.  The name alone should tell you something about this game, it’s unique and its developers don’t care how hard it is to market on the App Store.  Just kidding guys.  But in all seriousness, this is an indie developed 3d first person shoot…well not exactly shooter that looks great and has nice controls.  The music, though overused, is absolutely stunning. 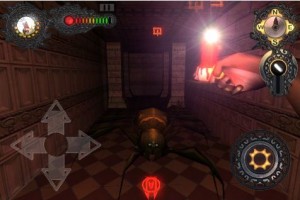 The beginning of the game tells the story of a wicked sorcerer stealing all of the light within the world.  Your mission is to go into a maze-filled dungeon and using only a candle, recover shards of crystal to bring light back to the world.  So basically, you have a pretty standard setup for a role playing game.  However, this game is much more of an adventure game than role playing and certainly cannot be considered purely an action game despite its first person view.  The lack of a gun and the addition of a candle should be a dead giveaway of that. 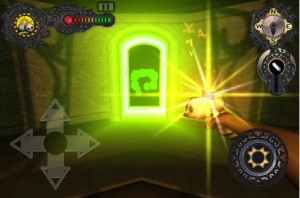 Within the game you will find 8 mazes, each of them leading to one of the shards of light.  Several of them will be very easy to navigate but as you get further into the game, they become progressively more complex and difficult.  Luckily, the game gives you chalk that allows you to mark the floor where you have come from.  Throughout the hallways you will find scorpions and other deadly creatures along with traps.  Using only your candle you will fight off the creatures and guide you way to safety.  That is, if you can do it in time.  You see, the light of your candle only will burn for so long.  When it goes out, the shadows and the creatures hiding within quickly destroy you. 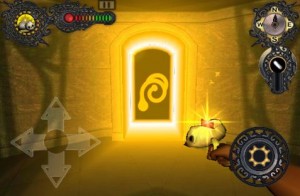 Though the game doesn’t last terribly long, the high quality of the graphics along with amazing background music and controls leave you wanting more.  While the storyline is nothing special, it’s serviceable and the actual mechanics within the game work pretty well.  At $1.99, this title is a good fit for most anybody looking for something a little scary and a lot different.