Marbles. It’s fun for the whole family, enjoyable for nearly everyone, and simple enough to wrap your head around the concept in about 30 seconds. Enter Marble Mixer, a multiplayer title with three separate games jammed into one app to keep you shooting marbles all over the place like you don’t even own that high definition flat screen TV or overpriced Macbook Pro. Okay, well you’re playing it on an iPhone so let’s not get quite so carried away. 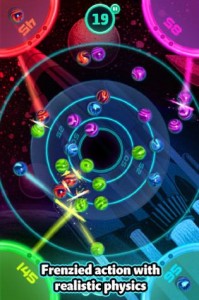 To ensure everyone’s adequately entertained, Marble Mixer includes three options for gameplay; Space Mania, Table Tactics, and Monster Picnic. Up to four people can join in the marble slinging mayhem, which can be toggled between computer and live players. All of the games have their own scoring system, while utilizing a similar interface and overhead view as you attempt to beat the pants off the sometimes unbelievable accurate AI. For $.99 it’s not too shabby, although if you’re not particularly enthralled with marbles this might wear thin quickly.

After loading up the app, a rotating wheel presents the three game options, each with their own appropriate backdrop and theme. Monster Picnic features a cartoony face spinning in circles with increasing velocity as he gobbles up each well aimed shot, while Space Mania paints a fertile background with planets rockets, and so forth. Each player’s marbles are unique colors, which ricochet off each other as the playing area becomes littered with blue, purple, red, and green shiny orbs, as you franticly attempt to score more points. 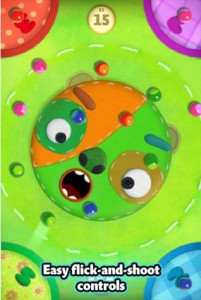 GameHouse immediately earns some respect on the sound by enabling players to use their iTunes library and generate an entertaining playlist to shoot marbles by. There’s plenty of clicking and clacking as each shot bounces off obstacles, which can become pretty hairy towards the end of each 60 second match, especially with four people playing simultaneously. If you choose to allow the game’s music to play, a unique, electronic, spacey track plays for each game mode, which seems to speed up as the round reaches its pinnacle. 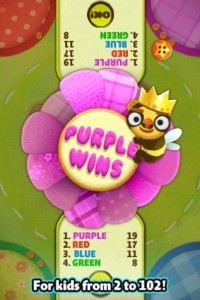 By including multiple gameplay options, your own customizable soundtrack, and a control system which basically only requires you to flick with varying force to shoot, Marble Mixers develops itself into a pretty decent title. I suppose the real question is whether or not you’d be into a marble game, but this is certainly a nice one for fans lurking out there in iTunes world. Feel free to give this one a shot, and toss GameHouse some kudos for permitting people to use their music library instead of forcing people to listen to some lame electro-keyboard soundtrack.