Townsfolk versus Zombies. Mild mannered people pitted against the rotting carrion of the undead. Grab the nearest torch or club and prepare to smash the enemy while defending the leader of your group in this latest mobile title from Behold Studios. The Gravedigger allows players to choose their team and enter the trenches of a local town to wage war in a real time strategy format. Although not without a couple hiccups, this is a decent breakthrough into the genre which actually dares to venture past the landlocked tower defense setup. 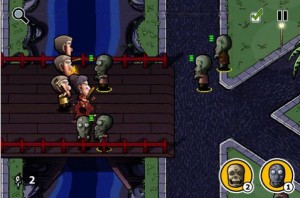 The Gravedigger features two different game modes; the typical campaign mode, and a quick play version in case you’re hunting for a quick fix. Broken down into assorted levels with objectives and increasing difficulty, campaigns slowly grow with the player, allowing you to learn the nuances of the game, as the maps and upgrades become larger. The options are slightly limited though, as once you start to figure out each side’s weak points, obliterating the enemy can become all too easy, especially after building up a beefy army of zombies or townsfolk.

Utilizing a quaint, cartoonish graphics engine works well for The Gravedigger, as the sprites are a nice medium size, with purposefully oversized heads. While upgrading characters to skeletons, mummies, torch bearers, or rifle carriers, a slick animation envelops the unit, transforming them into a new and improved soldier. Animation during battle is also pretty smooth, as each person attacks with ferocity, attempting to destroy the advancing forces. Perhaps the coolest visual flair is while slaying the leaders (priest or gravedigger), resulting in the priest sailing up a flight of stairs into heaven, or the gravedigger disappearing into the depths as an evil red claw drags him down. 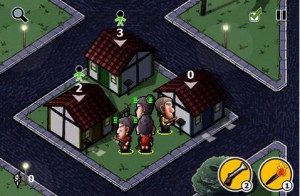 Throughout all the zombie and citizen smashing fun, a haunting soundtrack broods over the game, with plenty of electronic creaks and groans, fitting the game like a glove. Popping rifle shots, punchy attack sounds, and eerie noises as the undead rise again for what seems the 100th time keeps the action flowing. The townspeople even say “Hey!” after recruitment from a nearby home.

There isn’t an overwhelming amount of items to control during gameplay, as Behold Studios kept everything incredibly streamlined and relatively simple. Select the necessary units by clicking on individual sprites, drag a window to wrangle a whole group, or double tap to select all soldiers of a particular type. Occasionally though, teams will follow completely illogical paths, become stuck behind a house or tree, or just completely stand still while other soldiers have their heads blown off. They’re designed to automatically attack, but the zombies especially are incredibly stupid, sometimes refusing to move as you futilely tap like a lunatic on various locations. 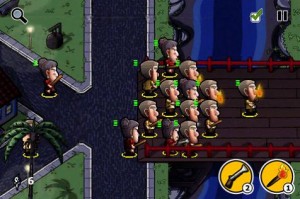 This is definitely a nice breakthrough into real time strategy games for mobile devices, which left me searching for a bit more from Behold Studios. I’m not expecting the next Age of Empires or Command and Conquer, but more difficulty settings and gameplay modes, as well as some improved AI would vault this title to new heights. There are more features coming in the next update, so I’ll be excited to see where the developers take this game’s potential. The battle’s just getting started, don’t be left behind.