Enter the bleak, dismal world of The Shadow Blight with Professor Helsing and his loyal assistant Raffton, and prepare to face the demonic minions of Dracula. Armed with torches and explosive tonics, the team navigates their way deeper into the darkness, while the puzzles becoming increasingly quick and addictive. Combining unique level design and an interesting, yet somewhat corny storyline, Helsing’s Fire will have you battling rats, skeletons, and vampire bats for hours on end. 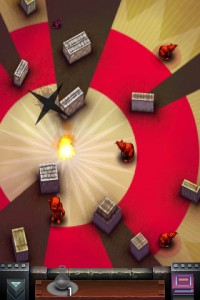 Set in a grim, gothic influenced setting, the undead smashing duo move from level to level while attempting to vanquish the evil Count Dracula. Armed with literal hordes (there’s 90 levels) of enemies which escalate in strength and difficulty over time, the vampire king is no slouch. Using the torch to illuminate the blast pattern, players have to cautiously, yet swiftly, solve puzzles while avoiding harming innocent damsels in distress. Walls are scattered about the playing area, which consistently alters itself during each level, to make each challenge unique and interesting. The play is quick though, as many levels will take less than 30 seconds to complete, permitting Helsing’s Fire to become as addictive as possible.

The interface is blocky and somewhat rigid, requiring you to click on each square to enter the next puzzle. Assorted red, blue, green, and gray colors make up each level, which changes as you advance deeper into Dracula’s maze of twisted challenges. Your torch is the most important piece, and it illuminates the potential blasting path with liquid smoothness, allowing you to slowly, yet effectively solve each quandary. When detonating, a wave of color washes towards the enemies like a tidal wave, smashing them into pieces if successful. 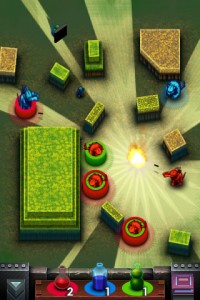 Helsing’s Fire rests upon an incredibly simplistic control system, only requiring players to click and drag the torch into place and let go. When you’re ready to crush some enemies, click on the corresponding tonic color, and Raffton pulls the trigger on the next explosive assault. Click, drag, click, and kill. Got it? 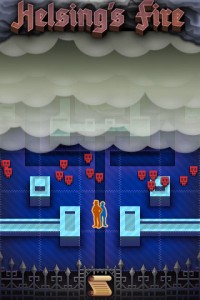 Intriguing puzzles, themed music, and an easy to use, yet reliable control system; what more could you really ask for? While the dialogue between Helsing, Raffton, and Dracula is almost laughably rigid and silly, the actual game content is slick and addictive. Even better, with survival mode and tons of levels, this far outlasts other $0.99 titles. This is another score from the makers of Angry Birds for sure.