Grab your sword, hammer, and ray gun, because it’s time to defend the planet from an evil horde of samurai mice! Somewhat similar to Whac-a-mole, Army of Mice arms you with an assortment of weapons and power-ups to smash the enemy mice into oblivion, while they attempt to slice and dice you with throwing stars, swords, and just about anything else you can imagine. Multiple game modes and nearly 120 levels are just the tip of the iceberg on the latest title from On Concept Ltd. 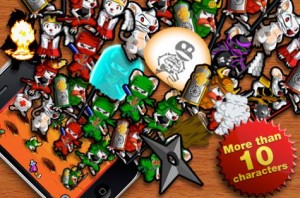 Army of Mice essentially breaks down into two separate game modes; story for an escalating war against the ninja rodents, and survival for a near breakneck speed battle. While progressing through the levels, you earn upgraded weapons, gold, and of course, more enemies. Innocent mice and bombs must be avoided, while you have to time each tap, as hitting with the wrong weapon is ineffective, and attacking an empty spot inflicts damage. The game begins with three hearts of health, and even though medicine power-ups are available, the later levels becoming increasingly difficult to survive.

A cartoony layout serves as the battlefield, with rows of holes containing a multitude of surprises for players to collect or destroy. 18 unique enemies, dressed in a variety of ninja garb and armed with an arsenal of weapons try to take your head off, with a bright, bloody slash ripping across the screen after taking damage. On Concept wasn’t afraid to include some gut splattering violence either, as your rodent enemies go bug eyed after their torso is slashed in half. Well, it’s no Mortal Kombat, but a little cartoony violence never hurt anyone, right? 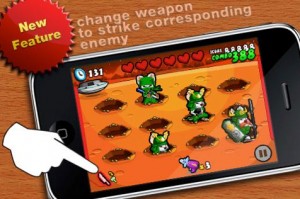 From the head bopping, jazzy intro tunes, to the groovy gameplay music, Army of Mice maintains its infectious vibes from beginning to end. A plethora of sound effects are included, ranging from slicing daggers to hammers colliding with enemy shields. The action almost becomes so intense though at points, you aren’t even paying attention to anything except the current challenge at hand, especially during survival mode.

There isn’t much complexity to the controls, as all the game ultimately requires is clicking on the desired spot and changing weapons. The pace can become almost completely ridiculous at points, but Army of Mice does its best to keep up, which usually manages to remain pretty smooth. It’s not quite brain surgery; see the mouse, click the mouse, kill the mouse. 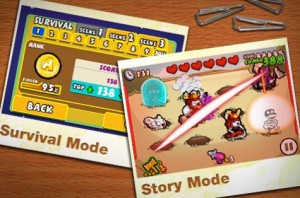 While it might come down to being a glorified, modern take on Whac-a-mole, this is still one super entertaining title, especially for the $0.99 tag. As usual, I’d appreciate the option to play my own music, but On Concept at least provided everyone with some quality sound effects. Grab a hammer and don’t blink, because these mice are ferocious.