If there was an award at iPhone Gamer Blog for weirdest game ever, Nesen Probe, would win.  That being said, weird doesn’t necessarily mean good.  In this game, you take on the role of a flying spaceship nose (oh you expected something not quite that weird?) that goes around trying to suck in flying circles of green and purple (and a health kit from time to time).  The real danger lays in accidentally sucking up one of the encroaching gray circles which take away points and life. 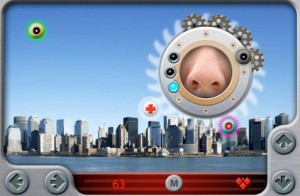 Is that whole game concept strange enough for you guys?  In action, you’ll fly your spaceship nostril around with a background of your choosing as the setting.  Unfortunately you are pretty much boxed into the size of your iPhone or iDevice; no scrolling or flying around more than a few inches in this game.  You can only suck in the orbs while you are inhaling so you need to time it correctly.  The same holds true of exhaling.  If a gray orb is flying by you can exhale near it in order to ward it off. 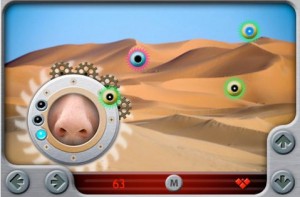 The actual gameplay mechanics of this game aren’t bad but the lack of options and lack of social interaction is well…lacking.  In fact, the only score you’ll be able to see is you’re highest.  There’s not even a top 10 list.  Most game I play let me sort high scores by my friends, their friends, regions, overall, etc.  To not have that ability seems really strange especially for a game that boils down to trying to get the highest score you can.  I ended up with 1700 points one time and I have no idea if that is good or bad.  OpenFeint (or some social network like it) isn’t just a nice thing to have for a game of this type, it’s a must have. 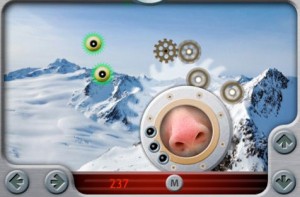 The lack of options is also surprising.  The game offers up just the single gameplay mode and doesn’t allow you to use your own backgrounds as you fly.  A few additions along with some social networking options would go a long way to helping this be something worth telling your friends about (although the weird factor is already a great way to break the ice).  As it is, this game isn’t worth the buck unless you just have to see a living, breathing (literally) flying nostril in the Sahara desert.