It’s not that Soccer Rally is bad, just that it’s not very special.  I mean, basically what it boils down to is a pong-type game clone with you controlling a goalie instead of a bar.  Instead of a pong ball, you have a soccer ball.  There are a few things I’ll discuss below that make it as bit more interesting than old school pong but all in all, and I won’t beat around the bush – you probably won’t like this game very much. 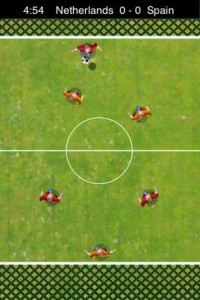 The game includes 2 additional players on your soccer “team” for a total of 3 each.  You control the goalie while your teammate’s skill sets are determined by the developer.  One cool thing is that the game was developed right around the World Cup so you get to play with the country of your choice against competing countries in a World Cup-esque tournament.  That’s about as fun as the game gets though.

The other 2 CPU controlled players start out a game in exactly the same way every single time.  They kick it very slowly directly to the other team.  Then the goalie kicks it past your defenders (almost always) and the other team has the first shot.  This process, tedious as it is, occurs in basically the same way throughout the rest of the gameplay.  Your job as the keeper is to try and block the oncoming CPU shots.  You do this by sliding the goalie back and forth with your finger. 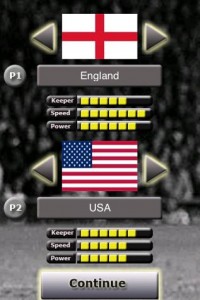 The 2d graphics, along with the basic player animations don’t kill the game.  The game is really killed by the lack of strategy you can employ as the keeper.  All you can do is block the ball.  You can’t kick it back to the teammate you want to.  In fact, the ball will simply bounce out of your world class keeper’s hands (often to the other team on the other side of the field). 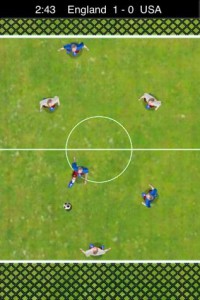