Word jumble mania! While it’s certainly not an entirely fresh concept, Drewse concocted their own little spin on a nearly timeless classic puzzle format, along with a couple of twists and turns. There’s something to be said for inexpensive, straightforward titles, and Jumbled hits the mark as far as world puzzles go. Sure, there might already be an avalanche of similar games, but this isn’t just a rehash of Hangman or a crossword puzzle, but something pretty entertaining. 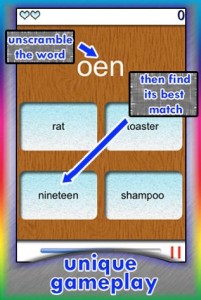 Jumbled presents a vast library of words scrambled and served up for you to figure out. Instead of just rearranging the letters though, you’re given four other words, one of which is associated to the jumbled one. For example, if the puzzle is “yee,” and the available options are “cheek,” “lion,” “fridge,” and “red,” the correct answer would be “cheek.” “Yee” = “eye,” so you would select the choice which fits in the best suited category. Of course, the difficulty increases slowly while playing, making each and every quandary slightly tougher. Occasionally words will repeat themselves, but Jumbled is pretty bug free otherwise.

If you select the wrong choice or time expires, one life heart is taken away, and when all five are lost, it’s game over. With three difficulty settings, you can feel free to challenge yourself as much as possible, and even with the small hints Jumbled allows, the later puzzles can be pretty dumbfounding.

Everything is fairly ordinary visually, with a brightly rendered wood grain surface serving as the backdrop. The jumbled word is written in plain white font up top, with four squares representing the answers on the bottom half of the screen. Select right and a bright green check mark bursts into the screen, while a fat, red “X” signals an incorrect response. 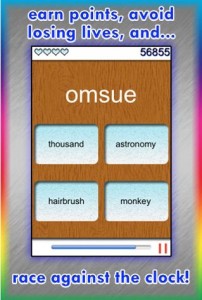 Drewse painted a nice musical landscape for their latest title, complete with a variety of sound effects and background music. Fast paced, catchy, bounding tunes hum along during game play, attempting to keep the action moving as you race against the clock. Clicking noises signal each choice, with a little “taa-daa!” playing for each correct answer, and an angry buzzer tone for a wrong one. As the timer runs down, an ominous “tick-tock” sound erupts from the speakers, eventually leading to the buzzer if the clock expires. 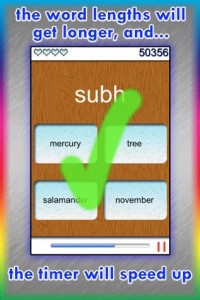 A simple, yet entertaining title, Jumbled delivers nearly everything you could expect from a $0.99 word puzzle app. The controls are simple to use, and Drewse streamlined play to allow even the most easily confused gamer to enjoy themselves without too much of a headache. I’m not totally sure of how long this will hold everyone’s attention, but there isn’t really anything to lose with the cheap price tag.