Finally, an iPhone 4 exclusive game, Flip It! Gyro, has made it through our email doorway.  This game uses the specific capabilities of the iPhone 4, such as the gyroscope, for all of its gameplay.  While it’s not used to amazing effect, it’s nice to see it being used at all. 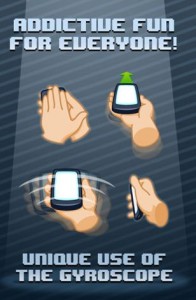 The gameplay itself really revolves around you going through short missions that have you listening to a voice that calls out directions; up, down, left, right, shake, etc.  Your job is to take your phone and turn it in whichever way the voice says.  The difficulty comes in that you are timed during each move and you only have a second or two to complete it.  The difficulty is further increased as you complete each subsequent mission and the directions get faster and harder to do one after another. 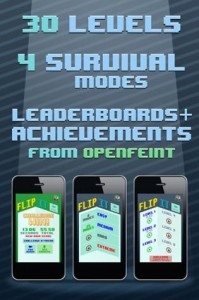 Unfortunately, the phone turning process is not without its problems (and I’m not speaking about carpal tunnel syndrome).  Turning the phone down frequently goes unread by the game and ends with you losing a mission.  It also requires that you have about as much room in front of you as you need for a Wii console.  Finally, be careful.  Remember that you are holding a 400-500 dollar phone, not a 30 dollar Wii controller.  Don’t throw it. 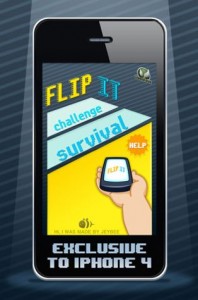 The game also has a survival mode that has you go until you make a mistake.  This addition is great for all of those people that love to compete for high scores on a social network (which is integrated).  While the game is not complex, the idea is new for the iPhone 4 and really shows off its new gyroscope abilities.  Pick it up to show off for your iPhone and iPod Touch friends without an iPhone 4.  Pick it up because it can be played by anyone in your family.  In the words of Larry David on Curb Your Enthusiasm, It’s, “Pretty, pretty, pretty, pretty-good”.