Is Geometrix an action game? Is it a puzzle title? Does it belong in the list of free apps rather than the paid ones? Only one of these questions deserves a whole hearted “yes,” which is disappointing to say the least. With a collection of three different mini games, Ravenhawk Interactive delivers an overall bland, boring title which doesn’t particularly excel in any specific categories. 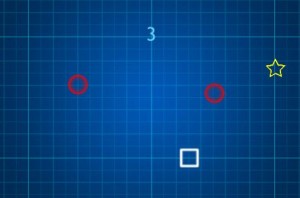 Once the opening menu pops up, Geometrix offers up three games, Chain Reaction, Star Chaser, and Orb Assault. While each one has its own rules, options, and difficulty settings, they follow a similar framework of tapping on the screen to move a square for whatever purpose the challenge requires.

Chain Reaction essentially requires you to tap like crazy on assorted colored squares, which then explode, creating a number of bursting squares and shrapnel. Star Chaser involves clicking on the target, and then moving your square to avoid random red circles while collecting more stars. Finally, Orb assault is probably the toughest, requiring you run a square into other oncoming shapes and change colors by pressing on colored spaces on the bottom of the screen. 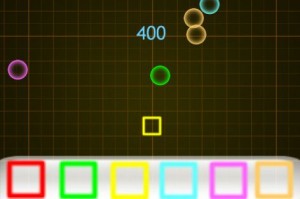 Everything is pretty two dimensional, although the animation is at least decent. The background is similar to graph paper, only with a blue-purple background. The squares change colors during some of the mini games, and Chain Reaction probably contains the largest visual display, as the shapes burst into white pieces when hit successfully.

Geometrix provides a small menu to select which crazy techno song you might prefer to listen to while enjoying all of the action packed fun. Of the eight choices, everything is fairly similar, but I suppose it’s nice to have the option of picking which one you’d rather hear. There really aren’t any sound effects as far as I can tell, so this is about all your ears will be receiving from Ravenhawk Interactive.

The point and click control system is fairly reliable in each of the three selections, although there’s definitely some occasional bugginess in Chain Reaction. It feels as if half of the touches aren’t registering, but then again there isn’t really any objective to the game so I’m not really sure what you’d be missing out on. 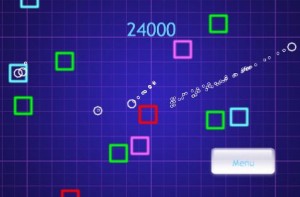 Paid apps such as these with a couple random games thrown together with a midi soundtrack smack of someone hoping to make a quick buck. Even with the $0.99 price, there’s no way Geometrix is actually worth it, especially when companies such as Donut Games churn out plenty of free titles which are about 50 times more entertaining. Maybe their next game will be more worthwhile, but for now I’m staying clear of this one.