Publisher: We Are Colin

A game with the look and the feel of Hook Champ with the ability to flip gravity at the tap of a button – I have just described Gravity Runner, a new release from distinctly named developer, We Are Colin.  The unique gameplay makes the game fun and the heft of 50 missions gives you a ton of gameplay.  Sometimes games like these rely too much on automatically generated terrain but this game gives you developer created levels that take each and every object placement into account. 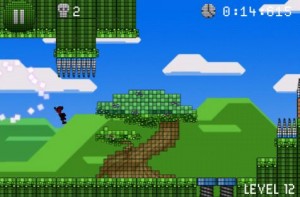 Gravity Runner is a platformer that has you jumping over boxes, spikes, and canyons while trying to collect as many coins as possible.  It actually sounds exactly like a first generation Mario game when I describe it like that.  To be honest, it’s exactly like that except that at any given point you can flip everything on its head – well not everything.  Actually, you can just flip yourself.  That unique gameplay dynamic is what makes Gravity Runner challenging – and it really is challenging.  Timing your jump and the flips of gravity will cause you a ton of headache on some of the later levels.  That being said, there are some nice touches to make sure you don’t pull your hair out. 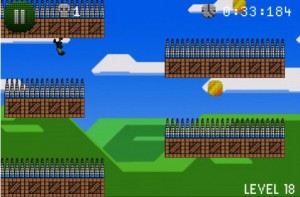 While you can die in a level (a level use lasts less than a minute to complete if done correctly), there are checkpoints thrown in here and there.  Luckily, these checkpoints seemed to be placed at just the right part so you don’t have to start from the beginning after passing a really tough patch of terrain.  The game also counts your deaths as you progress through a level and gives you a rating based on how well you did while passing it.  That being said, even if you die a 100 times the game will allow you to progress to the end of the level which is another nice touch taken directly out of the playbook of Super QuickHook. 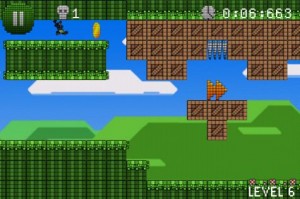 This game is not without its issues.  The graphics are nothing to write home about and the music and sound is middling at best.  That being said, it does bring a new feel to the mundane platformer genre and that should be applauded and supported.  You won’t be taking much of a chance by laying out a dollar for this one and I recommend that you do so.