NHL 2k11 is the best sports game on the iPhone/iPod Touch.  At 2 dollars, it is also the best value and if you have even an iota of interest in hockey I urge you to make the purchase.  In fact, the controls, the graphics and the functionality add up to this game being one of the top iPhone/ipod Touch games of 2010.  Incredibly there was little fanfare or discussion about this game before it was released earlier this week.  For you nonbelievers or people who don’t value written reviews, try out the free NHL 2k11 lite version and become a believer.  This game is awesome. 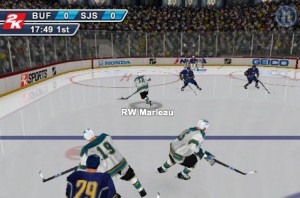 Sure, the graphics are great and the animation is amazingly smooth, but what about the gameplay?  While NHL 2k11 this isn’t going to give you the most realistic version of hockey you have ever seen, it sure gives you a fun game of hockey.  Remember the good old days of NHL 94/95/96 on the Super Nintendo?  This game reminds me of those games only with better controls, ai, graphics and a slicker presentation.  Did I mention that it’s only two dollars?

The game ships with real NHL rosters for the 2011 season which begins in October.  It has several modes including season, quick play, free play and shootout.  The season mode allows for trades, injuries, and a ton of statistics.  It even includes awards and the Stanley Cup playoffs.  The other three modes are fairly self explanatory.  While there is no multiplayer, the season mode should give you hours of replay value and actually includes quite a few options for setting up the league with the options you prefer. 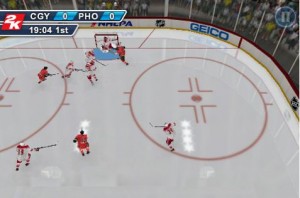 The ai is competitive and the game is fun to play even at the rookie level.  There are four difficulty levels and each one shows a noticeable upgrade in ai ability.  The game uses a virtual control stick for skating and a three button system on the right side of your iDevice for all of the actions you can take during gameplay.  The buttons switch functionality depending on if you are on offense or defense.  The button placement takes a bit of getting used to but after a while it becomes second nature.

The gameplay itself is also fairly fast paced.  If you are looking for the real life strategic parts of hockey to be detailed, you won’t find it here.  Instead it will feel like the best (in my opinion) parts of hockey where it’s always the last few minutes of the game and you have to go as hard as you can.  You have the ability to turn line changes on or off (I chose to play with them) and selecting between your lines can be done at any play stoppage.

The sounds within the game tend to be the weakest portion of the game with the crowd being an exception.  The crowd sounds great and you can really tell if you’re playing at home or on the road.  The sound becomes problematic when it is not used to alert you to a goal scored by your opposing team.  This is especially the case when the other team scores while you are at home.  Sometimes you can’t even tell because the goal scoring siren doesn’t go off.  There is also no sounds played to alert you off penalties (a whistle would be nice) so you have to go by the notice in the top left hand of the screen.  There is no commentary during the game at all which for me is a relief.  There is nothing I hate more than an iPhone game repeating the exact same 4 lines over and over again. 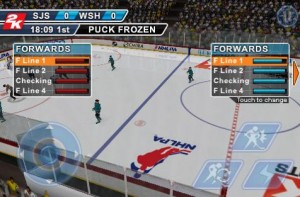 This game isn’t a masterpiece but it is shockingly good.  Hockey is a perfect fit for the iPhone and I can’t wait to see where this series goes in the future.  While the game is missing things like fighting, multiplayer and a franchise mode; this is just the first iteration of the series on the App Store.  2K China did a fantastic job with this version and I guarantee that anyone that has the least bit interest in hockey gets their money’s worth with this game.