Yes, it’s exactly the Top Gun you’re probably thinking of this very moment. Get ready to take an exhilarating ride on the highway to the danger zone with this latest title from Paramount Digital Entertainment, packed with weapons, ships, and of course, your favorite 80s soundtrack. Lively graphics and a multitude of enemies are just the beginning for this fast paced flying shooter which attempts to satisfy fans of similar arcade classics. 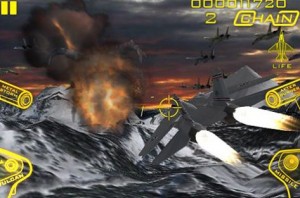 Upon launching, the familiar Top Gun logo pops up on the screen, with ever-so-recognizable tunes playing along in the background. While selecting a mission, players are presented with a digital map of the earth, with a handful of options dotting assorted locations around the world. While playing, further missions unfold, each with their own perilous plot line which is delivered rapid fire from your esteemed admiral. Collect money after successfully demolishing the enemy to upgrade each of the three planes, which allows you to enhance everything from shields to missiles.

Perhaps the most impressive point of Top Gun 2 is the well rendered, fully 3D graphics engine. Everything is animated smoothly, which keeps the action lightning fast, especially while in heated battles with boss gunships and legions of tank choppers. Bullets are illuminated in yellow, allowing you to track where everything is fired, as planes burst into a fiery inferno with a well timed missile strike. The backdrop changes with each level, becoming a mix of green islands and deep blue seas. 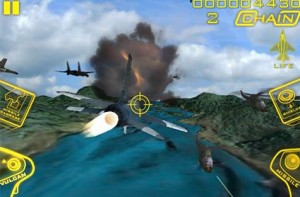 The soundtrack isn’t anything to write home about though, and about the 10th time through “Danger Zone,” even the hugest 80s rock fan is scrambling for the mute button. There’s an assortment of tracks, but I’d much rather be jamming to my own playlist than a rehashed soundtrack from this 1986 classic action film. Paramount Digital packed in the sound effects, especially during combat, as sizzling bullets fling off armor and sidewinders explode from the speakers. I would’ve liked some more depth here, but this is still decent for an iPhone title.

Controlling your gunship takes some practice, although it’s not quite as awful as some of the complaining reviewers on the iTunes site make it seem. The plane responds pretty effortlessly while tilting the device, but the sensitivity does tend to fly off the handle at times. Even after re-calibrating, and unleashing an endless hail of bullets, it can become frustrating to hit the designated targets during the first few missions. Utilizing the chosen ship’s artillery and shields are ultra simple though, with four touch buttons split between the right and left sides of the screen. 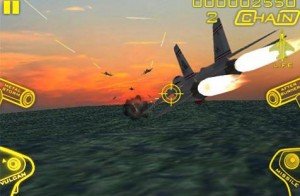 Arcade style shooters are always great for holding gamers’ attention, and Top Gun 2 is certainly no exception to the rule. While the sound could use an upgrade, and the control takes some time to become acclimated to, the crisp graphics certainly do their best to make up for any negative points. Hop in your F-16 and prepare to kick some tail, if you can.