Having just received my free iPhone 4 Speck case I can tell you one thing, I won’t be using it.  The button overlays make it really tough to use the top button on the phone which forces you to really squeeze the phone hard to use it.  The volume buttons are covered in the same hard overlay of plastic making it impossible to easily raise or lower the volume of your device.  Finally, and worst of all, my nice headphones don’t fit into the slot that is available for the headphones.  Apple’s default headphones will fit fine but any headphones that use a traditional bend in the plugin will not fit into the case at all without cutting the opening to make it larger.  Overall, this Speck case is just awful and it’s a joke that they normally charge for this thing.  That all being said, anyone want to buy a case?  Just kidding, I wouldn’t sell this thing to anyone.  Has anyone else received a case and had better results? 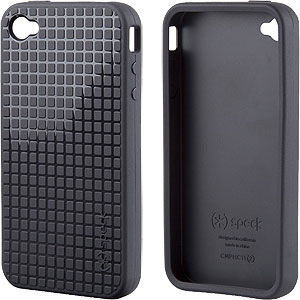 I saw a report a while back that Android phone are being sold at a rate of 200,000 every month.  Holy crap!  Apple’s only selling about a fourth of that per month.  Of course, we’re talking about a single company and a single phone and Google who is simply providing the operating system for tons of different phone manufacturers.  That being said, if they make it easier for developers to make money their app store will certainly have the user base to support more game development.  Many people are estimating that by the end of the year, Android’s user base is going to be larger than Apple’s iPhone base.  Whether you’re an apple or android fan, you should consider this a good thing.  Why?  Because the more mobile phone game players there are, the more seriously major developers will consider the market.  More innovative games should result.

Finally, my daughter is turning 1 next week.  She is already showing interest in my iPhone (probably because I’m playing around on it so much).  It got me thinking about what types of games she will want to play when she gets a bit older.  Whatever it is, I hope it’s not Farmville-type games.  Those things just kill me.  I want a game with a realistic building, selling, buying economy.  Surely a little kid would want the same.  Right?