Am I embarrassed that over the last week I have played Baseball Superstars 2011 for 8 hours? A little. Regardless, I had a heck of a lot of fun. If you aren’t familiar with the Baseball Superstars series and you are a fan of baseball, you have been missing out. The past 2 iterations of the series were a fantastic time waster filled with fun. This version improves the series in almost every way for a mere $5. You owe it to Gamevil and to yourself to pick up this title and start having fun. 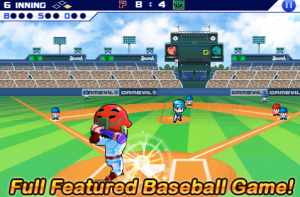 The game offers a ton of modes including Season mode, My League and a HR mode. It also includes a ton of missions you can complete that allow you to earn G (money that can be used to buy special items). The mode that will really take up a ton of your time is My League. In this mode you will journey through a career starting as a rookie and ending as a hopeful Hall of Fame player. Each year you are given goals, able to build relationships, and upgrade your player in a variety of ways. It’s an RPG game built into an arcade baseball game and it is so much fun.

On the field action takes a bit of getting used to, especially if you are coming from Konami’s Power Pros series (a great series in its own right). The action is incredibly fast paced and the pitchers have some wicked pitches at their disposal. However, if you hang in there you will be rewarded.

The sound within the game has been upgraded over year’s past as well as the graphics. The graphics really pop on the iPhone 4’s retina display. You’ll also notice that this year there are multiple stadiums, new teams and tons of new relationships you can work on throughout your avatar’s season. In short, you will be pleased if you are upgrading from Baseball Superstars 2010. 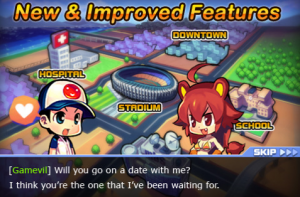 While Baseball Superstars 2011 certainly doesn’t recreate the wheel, it has added some new spokes. Regardless of what kind of gamer you are, if you have any interest in sports you will find this game simply delightful. Now that we are towards the end of the year, I can definitively say this one is one of the forerunners for iPhone Gamer Blog’s Game of the Year – no doubt about it.