Infinity Blade is the best looking game ever made for the iOS platform.  If that’s what you are looking for in a game, look no further.  Unfortunately you’re playing in a beautiful world that you have no ability to move around in.  In other words, it’s an “on rails” shooter or in this case, an “on rails” slasher.  You will be thrust into fight scenes with a variety of characters and your job is to kill them.  Along the way you’ll earn/buy better loot and level up your ability to use weapons, armor and other medieval hero accessories.  It’s fun, but it’s short. 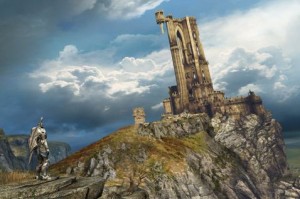 The entire game will take you about 45 minutes to an hour to complete if you play it straight through.  Several months ago Epic released a “game” for free that allowed you to walk around the beautiful world in which Infinity Blade is based.  That “game” featured no combat or goal at all which is why I put the word game in quotations.  It was a demo to show you how beautiful the graphics can be on your iPhone 4.  Mission accomplished.  Infinity Blade adds simplistic combat to the mix.  There are some frame rate slowdowns here and there as you slash your enemy in real time but by and large, this game looks and feels great on my iPhone 4. 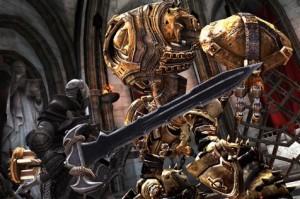 The actual gameplay has you controlling your character over his shoulder.  You can dash left or right to dodge oncoming attacks, block the oncoming weapon or try to parry with your enemy.  If you do well you will be rewarded with several seconds of time where you can slash the crap out of your enemy, use magic powers to soften him up or even a special power.  It’s a fun system if not overly simplistic. 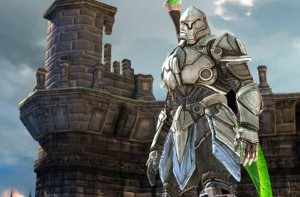 This game shouldn’t win any best game of the year awards and can’t really be called innovative.  However, it is beautiful.  It shows the graphical prowess of that little device you have in your hand for hours every day.  It also makes it quite clear that in the coming year’s iPhone gaming is not going away.  In fact, it is very likely to replace devices like the PSP.  The only thing holding the iPhone back now is its need for physical buttons to play games.  Infinity Blade proves that kiddy graphics are no longer an issue.