Tower defense titles have pitted gamers against aliens, zombies, soldiers, and legions of other grotesque, bloodthirsty foes. Cannons, rocket launchers, machine gun turrets, and flamethrowers have seared the flesh of enemies while cutting down the next wave attackers dead in their tracks. If you’ve grown as bored as I have with these turnstile apps, Diet Defense takes the initial premise of a tower defense title and transforms it into a cheeky, amusing game which pits fruits and vegetables against junk food. 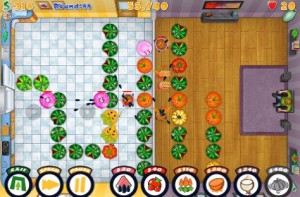 Similar to many other tower games, Diet Defense unleashes wave after wave of french fries, donuts, hot dogs, pizza, and other snacks in your overly plump direction. Each level sends the tantalizing greasy treats marching across the kitchen and into the living room, tasking gamers with strategically assembling an army of healthy foods to destroy the high calorie enemy before it slides down your gullet. Tomatoes, watermelons, onions, and carrots are just some of the devastating weapons at your disposal, which can all be upgraded and sold as needed for additional cash.

The graphics engine is fairly simple, yet nicely rendered in a fun cartoony manner which is appealing and easy on the eyes. All of the sprites are brightly colored and clearly distinguishable, making it a little easier to figure out what is going on in this all out food fight blitzkrieg. All of the stats are clearly represented towards the top of the screen, with the weapons neatly laid out across the bottom and any available choices illuminated. While attacking; seeds, tomatoes, carrots and assorted other projectiles sail across the screen towards the fattening foes, as their life meter slowly diminishes. 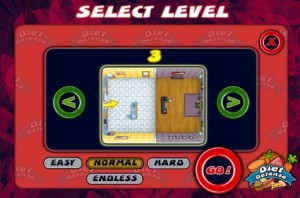 Upon loading the app, a funky surf rock song plays during the menu screens while preparing to wage war against weight. Other similar tracks repeat themselves during gameplay, which is dotted with smaller accent effects, such as coins gangling when purchasing a new unit, or an explosion after destroying a target. Different vegetables posses their own unique effects while firing, creating a decent enough soundscape for the Diet Defense.

As with most other tower defense titles, there isn’t much in the way of control, other than selecting a weapon and dragging your finger to the desired location. Tap on already established units to either upgrade or sell them, and that’s about it; short and sweet. There’s also an option to speed up the action, which sends everything into complete overdrive, allowing gamers to power through levels like a hot knife through butter. 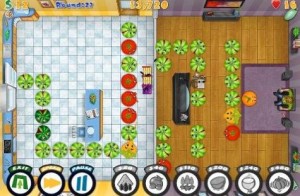 While the genre is certainly something that’s been thoroughly beaten to death, Apps Capital at least managed to pull off a decent spin on the idea. With multiple difficulty levels and four different levels, Diet Defense should keep gamers entertained for a bit, but the endless combat can begin to feel pointless after going through 30 or 40 levels. However, for $0.99 there’s more than enough gameplay to warrant the economic price tag.