Cut the Rope is a physics puzzlers that involve a series of increasingly complex pulleys, balloons and levers attached to rope that you must cut in a precise order in order to collect stars and reach your goal.  If it sounds complex, it can be.  However, casual gamers should not be scared.  The progression from level to level is gradual and you have the ability to play through over 100 levels without paying for any downloadable content. 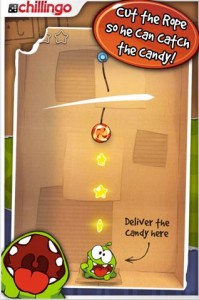 Games that involve physics and casual gaming have become more and more common on the iPhone in the last year.  With the huge success of games like Finger Physics and Angry Birds, that is sure to be a continuing 2011 development.  While Cut the Rope was released months ago, I felt it was a disservice that it hadn’t received a review on this site.  You see, Cut the Rope is very good.  It is one of those games that are easily accessible to the masses yet it is never too easy.  There are surprises throughout each puzzle and some of the ways you solve a puzzle are ingenious.  Maybe not to the level of Ragdoll Blaster 1/2 but certainly to the level of Finger Physics puzzles. 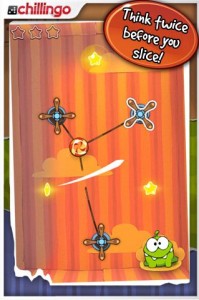 The controls in the game are simplistic with just a single finger able to do almost all of the work.  In later puzzles you may need to add an additional finger or so.  The community integration is through Chillingo’s Crystal service.  This tends to be one of the weaker parts of the game as most people would rather use Apple’s GameCenter to socially connect and share their success.  I imagine that in a future update that integration will be added although Chillingo seems to be very hesitant to add Apple’s Game Center to any of their games. 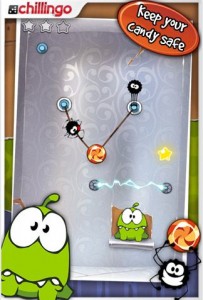 I can’t really say anything bad about this one.  Clearly it’s a classic already as millions of copies have been sold.  If you are bored of the games on your phone and looking for a sure thing, pick up Cut the Rope.  I guarantee you will enjoy yourself and with over 100 levels and more on the way; you’ll have hours of enjoyment for only a buck.