Remember I Spy and Where’s Waldo? Of course you do. Enter swenGames, our tour guides through a digitized experience of the hidden object puzzles which used to frequent elementary schools across the country. Offering up a smattering of items such as birds, animals, cartoon characters, clocks, and more, each stage lays out 20 targets to pick out amongst a horde of decoys which continually play tricks on the eyes. 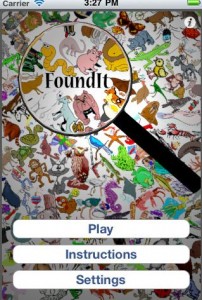 Set up in a format which appears similar to iPhone menus, FoundIt offers eight different levels of hidden item hunting. Players can rack up point totals based on their speed while the app keeps track of time and score for each puzzle, allowing the truly dedicated to improve upon their previous marks on each subsequent try. Unlike some of the book based puzzles this is based on, FoundIt presents the objects in a jumble on a solid colored background, which can require diligent scanning in order to track down those last remaining pesky stragglers.

With the exception of the flags and American state abbreviation levels, all of the sprites are drawn up in a fairly cartoony fashion, ranging from sharks and seahorses to monkeys and lobsters. Gamers can zoom in and out on the playing area as they search for the next lion eating a pizza, while enlarging the current target in the bottom left corner of the screen. Point and time totals are displayed in a bar across the top, and a collapsible list from the bottom right contains all of the needed items. 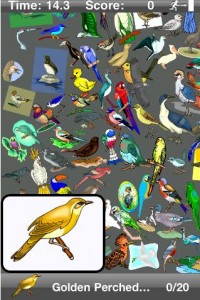 Throughout menu screens and gameplay, a quirky, catchy soundtrack streams from the speakers. While there’s essentially only one song, the sound is great background music for the game, but can also be switched off when gamers grow weary of the melody. Smaller sound effects also dot the experience, such as clicking on menu options, a pleasant chime after a correct choice, and a grating buzz following a wrong selection.

Control is basically as simple as using an iPhone, so if you’re comfortable with flicking, tapping, and zooming, playing FoundIt is an absolute snap. The game did crash on one occasion when the control stopped responding, but otherwise my time spent hunting down flags and clocks went pretty smoothly. 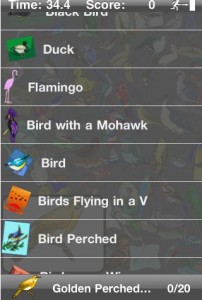 Initially it seemed like there wasn’t a great depth of content from FoundIt, but each puzzle allows gamers a reset option, which generates a new list of items, keeping the action coming for a mere 99 cents. Obviously, if you’re not enthralled by hidden object titles, this probably won’t be changing your outlook, but this is still a pretty entertaining app at the next best price to free.