The premise of Tap Animal is to tap the correct picture before all of the pictures change. The first level, for example highlights (with a yellow circle) which picture to tap. This level is very easy, however, as the levels progress they get difficult. The game stops highlighting the pictures for you and makes you actually look through the small pictures and find what you are looking for. For example, the game will highlight a deer and ask you to find its food. You have to scan over 12 tiny pictures looking for grass. Then you have to tap the picture of grass before the animal changes to a caterpillar, for example. Then you research the pictures looking for a leaf.  With increased difficulty you get decreased time. 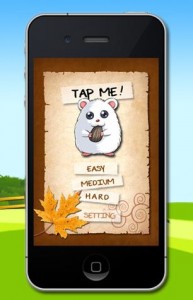 There are three difficulty levels, easy, medium, and hard. Just a warning, hard is very hard. There is not a lot of time to think and react because the pictures change so rapidly. Also, another reason the game can be so difficult is because the pictures are very tiny. They are very hard to see and recognize. Right now there are 12 tiny pictures, four rows of three. If there were only nine pictures, three by three, I think the game wouldn’t be as hard and be a lot more fun.

There are many different types of levels. I described the highlighting and the food levels above, but there are animal sound levels, shadow levels (where all you see are silhouettes), and name levels.  Along with the levels there are 12 sets of levels, each with its own group of animals. For example, there are Jungle Animals, Birds, Ocean Animals, Fish, Primates, and so on. 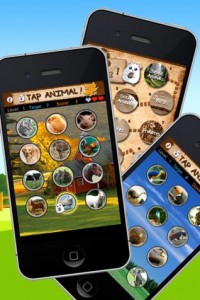 The graphics in the menus are great, nice and crisp, easy to see and use. It’s only during gameplay that things become hard to recognize. I think the developers realized this and added the name of what ever is pictured within the small circle during the food levels. Even with the description, time is short and you must be quick. The in game audio is very good, especially in the animal noise levels. 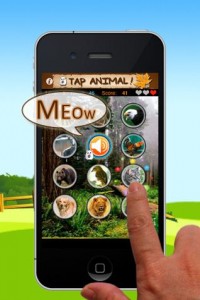 All in all this is an ok game. I tried playing on hard and it was way too difficult. To test the game I had to go all the way down to easy just so I could make it through all of the levels. I do think young kids would enjoy this game but perhaps instead of a countdown clock that changes the pictures you get timed with an increasing clock and the pictures change when you tap the correct picture? That would be more fun for kids.