It’s hard to play at any new App Store dirt bike game without comparing it to the leader in the genre, Moto X Mayhem, by Occamy Games (see our review here).  I went into this review hoping that Dirt Bike Trials would be similar in some ways and add some type of new feature or option that could propel it to the top of the hill.  Sadly, that is simply not the case.  In fact, Dirt Bike Trials is worse that Moto X Mayhem in every single way. 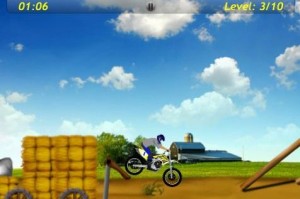 The graphics are without a doubt the best thing about this game.  The only problem is that they still are not up to par with Moto X Mayhem.  When creating a game to compete with a leader in the App Store, you have to create a game that has at least one advantage.  Usually a value entry is created to compete.  In this case, Dirt Bike Trials is the exact same cost as Moto X Mayhem ($.99), and has much less replay value.  In fact, it seems there is only a series of 10 maps that took the top player of the game (according to the high score leaderboard) under 4 minutes to beat.  Being able to complete the game in 4 minutes doesn’t bode well.  The sound within the game is pretty awful as well.  The music in some levels sounds like it has been remixed 3 or 4 times and dubbed on top of other music.  Your bike creates no sound at all. 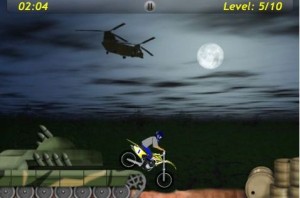 The controls and physics are the worst thing about this game.  The right side of your iDevice is used to accelerate while the left side is used to reverse.  That works fine.  But when it comes to leaning forward and backward using a tilt mechanism, the controls are extremely touchy and because of the insane landscape you try to ride over, you fall off over and over again restarting the entire level.  I didn’t mention that every time you fall off you hear a booing crowd.  After hearing that crowd boo you more than one or two times, you’re ready to turn off the sound (if you haven’t already due to the music).  Coming back to the landscape, it really is insane.  One of the things you have to ride over is a triangle shaped mound of black metallic looking balls.  Why Dirt Bike Trials?  Why? 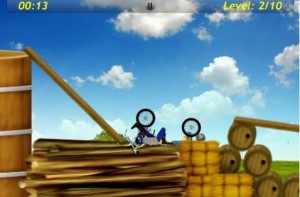 I went into reviewing this game with an open mind.   I had hoped it was an action packed, riding game.  Instead the only way to maneuver through the landscape is to crawl along at walking pace of 4 to 5 MPH.  I’m not kidding – you literally crawl up and down some of the hills if you want to pass a level.  In every way this product s inferior to Moto X Mayhem.  Don’t waste your time on this one.