Thumpies XL is a music/beat game where you must tap drums at the same time one of the Thumpies lands on it. They bounce back and forth from drum to drum creating a beat. The beat keep building on itself as the level continue. If you don’t know what a Thumpie is, it is a creepy little monster than is nothing but a head with a weird little faces. 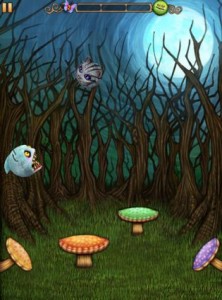 When I wrote the Thumpies review for iPhone I said that it had the best graphics I had ever seen on an iPhone game, well ditto that for the iPad. Bright colors and crazy designs draw the eye right in.

Other than the size of the screen and screen layout (iPad is portrait), the gameplay is exactly the same. Now, to be honest I can’t tell if they have used the same songs or beats from the iPhone but there are so many could you really tell if they did? Probably not!

One other thing to note, if you have a friend, you can play a bit of multiplayer Thumpies.  It works like the Pac Man arcade machines of old.  Use your iPad, and sit across from each other.  You battle it out on the same beats and the person who does the best, wins.  It is fairly simplistic but it is a welcome addition and gives the game some extra replay value. 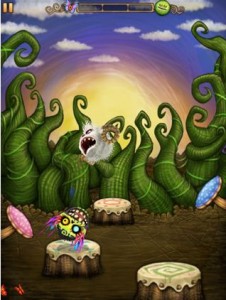 The size of the screen makes the game a little more challenging on the iPad than on the iPhone. The bigger screen means your fingers have to travel farther to tap the drums in time so  if you thought Thumpies was too easy on the iPhone you should give it a try on the iPad, you won’t be disappointed. 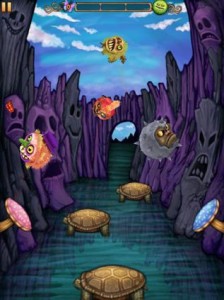 In conclusion, if you really bought the iPhone version, you may want to wait until a true sequel.  This version doesn’t really include any new content and comes with a higher price point (though the multiplayer is pretty sweet).  If you haven’t had the chance to play Thumpies on an iPhone or iPod Touch and you are now the owner of a new iPad, check it out.  It is definitely worth the cash.