The new iPad game, Sherlock Holmes Mysteries, is a  puzzle game where you must solve cases by interviewing people, picking up clues, and using your special Sherlock Holmes “insight”.

There are two cases you can take, one will slowly introduce you to the gameplay and the other is much longer with clues that are more difficult to find and use. Once you find clues you have to go into Holmes’ head and add clues and objects you have found into a puzzle-like graphic that will tell you if you have the right clues or not. If you do, then Holmes will solve a mini puzzle and you will get a new clue. You will have to do this numerous time to solve the case. 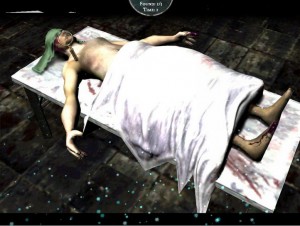 As in the movie and the original books, Holmes is a pretty good boxer.  Instead of solving cases there is a full boxing game that you can play. You start out fighting amateurs and finally end with professional fighters. The fighters get stronger and faster as you move through the ranks.

The gameplay during fighting is pretty simple. Before you opponent swings a red “block” circle pops up. All you have to do is tap it before he swings. To hit your opponent you have to tap on the “hit” circles when they pop up. You can also swing hay makers by tapping and dragging on certain “hit” circles.

The graphics in Sherlock Holmes are very good. So far I have been very pleased with all of the new iPad game graphics. In Sherlock Holmes, all of your surroundings are 360 degrees so you can fully turn around when looking for clues. The character graphics are also very good; they’re no Modern Warfare, but they are better than Golden Eye. 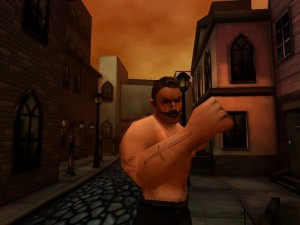 The audio is also well done. The sound effects are more noticeable during the fights due to the sounds of punches and blocks, but the rest of the game does also has sound effects, they are just more subdued. The music seems to be on only during menus and certain areas of gameplay; i.e. a parlor or bar. 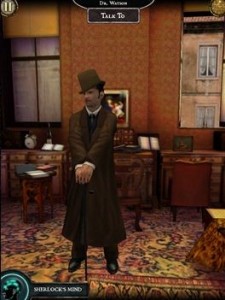 At $2.99, this is one of the cheaper iPad games out there. As of right now there are only 2 cases to solve and about 20 fights to go through before you are done with the game. Hopefully, a few updates will come out with more cases. Until then, I would pass. Even though the game is inexpensive, I don’t feel the amount of gameplay is worth the cost unless you were a big fan of the movie.  That being said, if you need your Sherlock Holmes fix, go for it.