Glyder 2 for the iPad is the same great game as the iPhone/iPod Touch version with a few new updates. If you’ve read the review I wrote for the iPhone version of Glyder 2, then you know how much I like this game. The graphics blew me away and the gameplay seems like it could last forever. 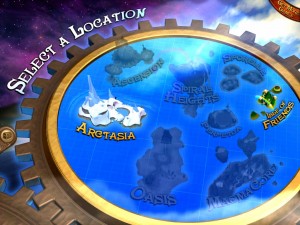 Well as you can imagine, the iPad version is even better. The graphics are upgraded for the HD screen and they look amazing. As far as gameplay goes, it is identical to the iPhone/iPod Touch version with one exception; Glyder 2 for the iPad has added a social networking aspect. Instead of levels, Glyder 2 has islands. You can fly back and forth to the island at any time during gameplay. The iPad version now has an Isle of Friends, where you can invite Facebook friends, track their progress, and fly around with them and help each other unlock game secrets.

The other update is a new way to control your glyder. The first time I played Glyder 2 on the iPad the tilt controls seemed very touchy. Small movement of the iPad would greatly affect my character, almost to the point where the game wasn’t fun. After a few recalibrations of the controls the character movements smoothed out, but wasn’t as smooth as the iPhone version. I don’t know if the developers also noticed this, but they included a second type of control, touch. You simply use your finger or thumb and treat the screen like a joy stick. I believe this style gives you much more detailed control, but it does take some getting used to. 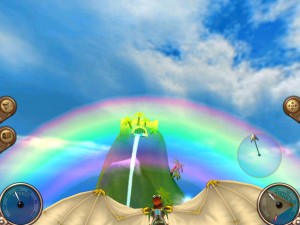 At $4.99, this game is a must have. There are literally days worth of gameplay in Glyder 2. The gameplay alone is worth the price, but considering the upgraded HD graphics and new social networking feature, this game is a steal.