First off, I’ll get this out of the way. Who doesn’t like pinball? Nobody, that’s who. We’ve all played full size pinball machines when we were kids.  I can remember playing a Star Wars pinball machine with my dad for hours.  Pinball HD is an iPad game that is as close to a real pinball machine as you will find on the device. 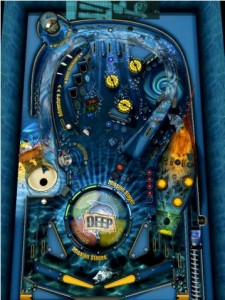 There are three different pinball themes including the old west, a jungle theme, and a submarine theme. Each theme gives you a totally different pinball layout. So when you buy Pinball HD (and you should) you are really getting three pinball machines in one.

The graphics are amazing on all three themes.  One of the things I really like about Pinball HD is that the view chases the ball when it goes around a long ramp or when it goes to the top of the playing board. When the ball starts to roll back towards the bottom, the view zooms back out and allows you to see the whole board. At first I didn’t think I was going to like the zooming but it really enhances the experience. 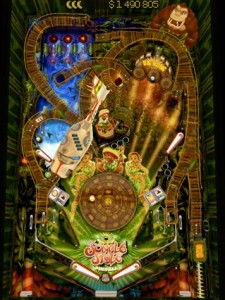 Like the graphics, the music changes along with the theme. Each theme has music that appropriately matches, but the sound FX stay the same for the most part. One thing I did notice was that the jungle themed music was very low and mainly just drums. This was unlike the western themed music that was very prominent. I felt like I was watching an old Eastwood flick.

In my opinion, each theme had a different difficulty. The western has very quick ball movement and doesn’t have a lot of ramps or scoring opportunities like the other two themes. The jungle theme seems easier. It has lots of ramps and tons of scoring devices. The submarine board falls right in the middle, being easier than the western but more difficult than the jungle theme. 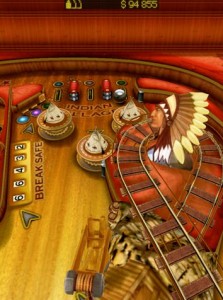 The controls are simple. Pinball HD uses controls typical of all pinball machines.  You’ll find fin buttons on each side of the on screen pinball machine. To operate the fins tap on the appropriate side of the screen; right for right and of course left for left.

I really like this game. I enjoy real pinball and this is the best pinball game I have seen for an iDevice. After your game ends you can compare your score to the rest of the world and compare your scores by date. At $2.99 Pinball HD is a great buy with endless amounts of gameplay.