Ever play six degrees of separation? Or my personally favorite, six degrees of Kevin Bacon? Imagine doing that with two random Wikipedia articles. That is exactly what Wiki Hunt is but you get as many clicks as it takes. 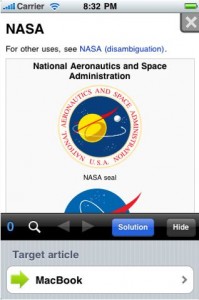 My first instinct was to read the target article and try to work my way to the starting article. Well by reading about the creek you find out it is in the San Francisco Bay area in California. So all I have to do is get to the United States right? Well thankfully Kosovo is part of the United Nations along with the U.S. So after reading most of 7 articles;

7. List of watercourses in the S. F. Bay Area

I finally made it to my target article in only about 20 minutes. But just to warn you if you don’t like to read then you won’t like this game. Personally, I think it’s ingenious. This forces you to read random articles that probably have no bearing on your life but will make you the random fact king with all your friends. 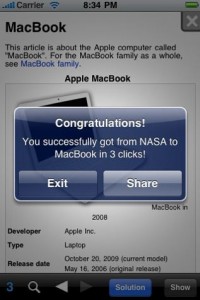 Me – “Hey did you guys know that the San Pedro Creek in Cali is the only major habitat for steelhead trout for 25 miles between San Francisco and Half Moon Bay.”

My friend – “That is so interesting Josh, you are so smart.”

Ok, so that won’t happen but this game is pretty fun and entertaining. Plus, you might learn something along the way. But keep in mind Wikipedia isn’t known for being 100% accurate, so keep that in mind. 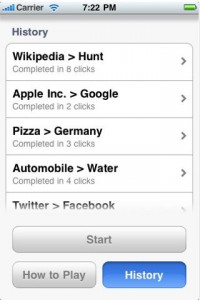 The game graphics are basically just the wiki page with a few game buttons at the top of the screen. One button takes you straight to the target article and also takes you back to the page you were before you tapped the button. If you get stuck there is a solution button that gives you the quickest answer. If someone doesn’t believe you went from shoelaces to unicorns in four clicks then you can go to your previous games in the history and prove it by emailing them verification.

There’s no music or sound FX and the controls are exactly like looking at wikipedia on safari. Overall, I like this game. It’s only $.99 and you can really pass a lot of time and you actually learn a few things as well.