I am a huge fan of bowling games for iDevices. With bowling, there is no limit to gameplay, it’s endless. It’s just you, the lane, and your ball. PBA Bowling 2 is the newest iPad bowling adventure that takes you through the gauntlet of a real PBA bowler. 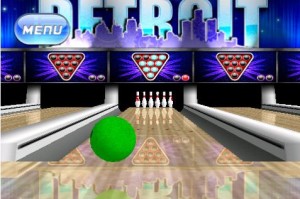 Everyone has been bowling or at least knows how to bowl so I’ll spare (pun intended) you the “how to” breakdown.  PBA Bowling 2 has three game types; Single Game, PBA Tournament, and the Spare Challenge. Single game mode is just you bowling a normal 10 frame game by yourself or with an opponent of your choosing (a second human player is also an option). The PBA Tournament is a full on competition where you must beat one professional bowler at a time. I’m warning you, this is difficult. In the Spare Challenge, the game will set up random pins based on difficulty that you must knock down like you are trying to pick up a spare. You get ten frames to pick up as many spares as possible. However, unlike real bowling you get two rolls to pick up the spare.

There are over 10 real PBA bowlers to choose from as opponents. Some of the names I recognize are; Rhino Page, Chris Barnes, and Pete Weber. I don’t think these guys are anything to shake a stick at, as far as competition goes these guys are top notch. You can also choose from different lane types including chameleon, cheetah, scorpion, shark, and viper. I can guess what the chameleon and cheetah types are but I guess you have to be an avid bowler to know what a scorpion lane is like. You may also choose an actually PBA location like Las Vegas, Detroit, or Indianapolis. When the PBA is in Indy they bowl at Woodland on 96th Street, so I was a little disappointed when the lanes in the game don’t actually look like the real Woodland lanes (I was there last Friday). 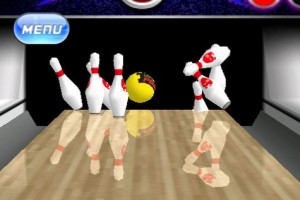 The graphics are not as good as I had hoped. iPad games have been blowing me out of the water with great graphics that are crystal clear and in high def. PBA Bowling 2 has an old look. The pins aren’t even rounded off towards the bottom, just jagged edges. When I saw that they had actually location I was pretty excited. Instead of making the lanes look like the real site they just but a logo that represented the city above the lane, i.e. the Indy 500 logo for Woodland.

The music on the other hand was really good. It was rock and roll, pump you up kind of music, but it’s only in the PBA Tournament mode and only plays during the first frame. The sound effects aren’t anything special. They are like most other bowling games; balls rolling, pins crashing, fans cheering.

There are a few different ways of controlling the ball roll. You can slide your finger upwards, flick your finger upwards, or use a three touch style. The three touch style consists of moving the ball left or right on the lane, selecting the angle, then the power. I used the slide method and bowled a 223 my first game. When bowling by yourself it’s not hard to get a good score, but the pros will get even higher ones. 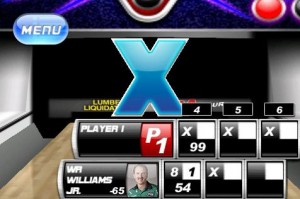 I really do like bowling games for the simple fact that it has endless playability, but I was looking for more from PBA Bowling 2. At $2.99 it’s not going to break the bank but there are other bowling games out there for less. In the case of PBA Bowling 2, the dude does not abide.