Ultimate Mastermind HD is a videogame version of the popular and well known board game of the same name (only without the Ultimate). The gameplay is identical on both versions. If you are unfamiliar with Mastermind, the object of the game is to match colored pegs in the exact order that the computer places them. For example, on the classic difficulty (four pegs), the computer will randomly choose four pegs from six colors (yes there can be multiples of each color). To figure out the color code you must select from the six original colors to try to solve the puzzle. After you play each row, black and white pegs are used to tell you how many correct colored pegs you used and how many of those pegs are in the correct spot. Black pegs indicate the number of pegs that are the correct color and in the right spot, white is for pegs that are the right color but not in the right spot. 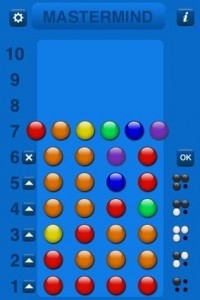 Ultimate Mastermind HD is meant for the iPad (hence the HD) but will also install on the iPhone. Graphically, there is a difference on the two devices. In portrait view the game looks identical but when the iPad is turned to landscape the games statistics come into view. You will be able to see your win percentage, games won, games played, best score, average number of moves and more. The graphics are fair basic on both devices. The game’s background is mainly one color, blue, and when it’s not blue, it’s a different shade a blue (sarcasm). The pegs are nice and colorful, but that is their purpose, to be different colors. They are shaded well giving them a 3D look. Overall though, the graphics are pretty lackluster. 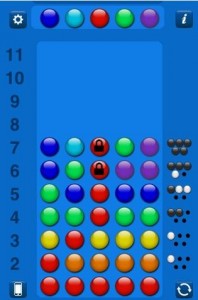 The controls are great and very life like, you can tap to select a peg or touch and drag to the spot of your choice. The great thing about the touch and drag is that you can touch any peg, anywhere on the screen and drag it to you any spot. There are also hot buttons located on the left of the game screen that will automatically place a certain row of pegs at the next available row. Honestly, Ultimate Mastermind HD is disappointing. I want to like this game; I even own the board game version! It’s as if they tried to copy the board game exactly and didn’t use any imagination to make it better (visually) or more fun. They could have spiced it up a bit graphically and audibly. The boring background is horrible and the totally lack of sound is unbelievable. As a fan of the original, I’m pretty bummed. They really could have taken Mastermind to another, more interactive, level.