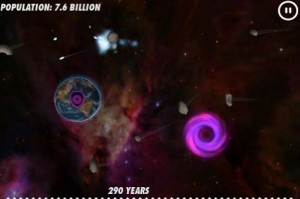 To diverge the asteroids you must tap the screen to create a black hole like object that has an immense amount of gravitational pull. These black holes, when well placed will redirect the asteroids away from Earth. A few things to keep in mind: you can only have three black holes at one time, larger asteroids are more difficult to redirect, and you can destroy asteroids by having them collide with each other. Also, there is a secret weapon. You will notice a shield icon on Earth that will slowly start to glow purple as time goes on, once its pulses you can deploy a shield that will protect the entire Earth for a few seconds. You can use the shield multiple times you just have to wait for it to recharge.

W.A.R.P. in played in landscape mode regardless of whichever iDevice you play it on. The graphics are of a high quality (especially on the iPad) but don’t include a lot of visual change. The view stays stationary with the Earth on the left half of the screen and the asteroids flying in from the right. The audio is pretty well matched with the theme and idea of the game. If the world were going to end this is probably the kind of music I would think of, menacing with a quick beat. 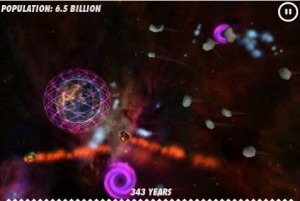 The controls are very simple. To create a black hole you just have to touch where you want it. The longer you hold your finger down, the bigger and stronger the gravitational pull will become. The menus and tutorial are very easy to maneuver and understand (I recommend taking a quick look at the tutorial). The options menu will allow you to turn music and sound FX on or off as well as see your ongoing stats for the game. 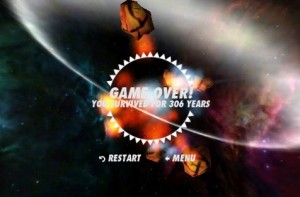 W.A.R.P. is a fun game with an endless amount of gameplay. You can even challenge friend’s high scores using Open Feint. For $.99, you can have a fun, good looking game on both your iPad and iPhone. With that said, this isn’t a game that you will play every waking moment of the day, but it is a great game to burn 5 or 10 minutes here and there.