Do you own an iPad? Do you like to spell? If you are one of the ubergeeks who said yes to both of those questions then keep reading because you are going to like what I have to say. 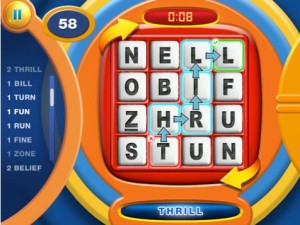 Electronic Arts and Hasbro joined forces back in 2007 for the purpose of EA releasing video game versions of Hasbro’s expansive collection of board games. Since their relationship began EA has created videogame versions of Monopoly, Scrabble, Yahtzee, and many other games.

To fill the gap of a new medium (read: the 2 million + that own iPads) EA and Hasbro have started creating video board games for the iPad starting with Boggle and Scrabble. You can see what has been released and what is soon to come at EA’s iPad website (http://www.ea.com/ipad).

The iPad version of Boggle is as close to the actually board game as you can get. You even have to shake the device to mix up the letters to start each game. When the game first opens a well laid out menu appears with your choices; Quick Play, Advanced Play, Achievements, Options, and More EA Games. I like the Quick Play option because it uses the same rules that I used when playing the board game long ago. The timer is set to three minutes and you must find as many words as possible before the time runs out. The Advanced Play option lets you play with up to four players in a Pass ‘n Play style game. You can also choose Advance Mode that allows you to change most game aspects, or Self Score mode, which doesn’t allow the iPad to keep score for you, you have to do it. 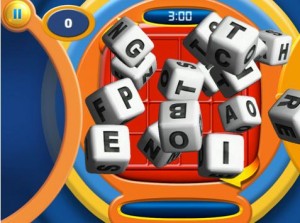 The audio and visuals are what you would expect from two companies like Electronic Arts and Hasbro. The graphics are crystal clear, the menus are easy to navigate, and the music is well tailored to a game like Boggle even though it doesn’t play during gameplay. With that said, there isn’t much you can do with graphics of a videogame based on a board game. So don’t expect groundbreaking graphics.  Instead, expect high quality graphics that are fairly barebones. If you would like to listen to your personal music during the game, all you have to do is pause the game and select the music player and boom. The sound FXs are also very nice, I specifically like the sound the cubes make when rumbling around on the game board. 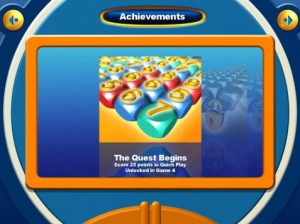 Boggle for the iPad has a run of the mill price of $2.99. Even though it is higher than some games, there is an endless amount of single and multiplayer gameplay that makes the five-dollar price tag not seem so bad. If you are a Boggle fan then you should really take a look at the iPad version. I doubt you will be unimpressed, especially with names like EA and Hasbro behind it.