Attack & Destroy is a strategic turn-based game where you control and lead a small three member team into battle.  Your team can consist of a shotgun toting Grunt, a sneaky Sniper, a Technician with toys, and a quick moving Scout. Each character has special powers that can be used every other turn, for example; the Grunt has a forward charge that increases his speed, the Scout can reveal hidden landmines, the Sniper can turn invisible, and the Technician can set up gun turrets.  Obviously the trick is that each one of these team members brings something different to each battle so you have to choose wisely when creating a team for each specific mission. 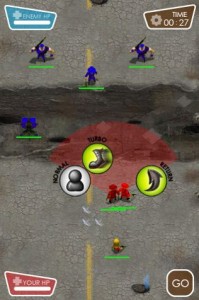 Gameplay comes in three flavors; Mission Mode, Challenge Mode and Versus Mode. Before you can do any challenges you must work your way through the missions and learn the ropes. There are three missions, each with three levels that become increasingly difficult. The missions consist of either a “defend” mission or an “attack and battle” objective. The defend missions will end when the set number of turns have been taken; the attack and battle objectives are more difficult.  You must not only fight off the enemy but also destroy their fort in the allotted turns.

The Versus Modes is probably the coolest part of Attack and Destroy.  The game can be downloaded once and played on an iPad, iPhone, or iPod Touch. With the multiplayer mode you can, from an iPad, play against someone that is on an iPhone or iPod Touch through a Bluetooth connection. Being able to compete with friends is always a great thing when it comes to videogames, so the Versus Mode was a great addition to Attack & Destroy. 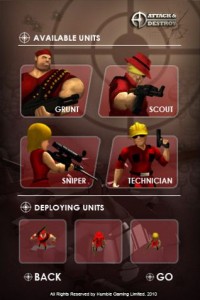 The top down gameplay view allows you to see most of the battlefield at one time, and with just a finger flick you can scroll up or down to see the rest of the map. The 3D character graphics are great on the iPhone, but just good on the iPad.  The landscape and backgrounds aren’t what you would expect; instead they are pretty plain and repetitive. 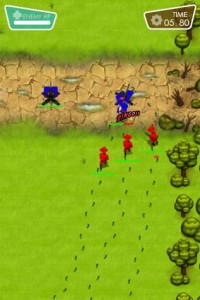 I can’t help but compare Attack & Destroy to App Store favorite, Trenches. They are very similar in concept and gameplay. The main differences are Attack & Destroy offers an iPad version and Trenches does not, however, Trenches is $0.99 and A&D is $1.99.  Both are fun games with hours of gameplay, not even including multiplayer. So the decision is simple right? If you have an iPad and really like Trenches, then you should get A&D.