Who doesn’t like puzzle games? Better yet, who doesn’t like a lot of distinct puzzles wrapped up in one game? Well Ancient Puzzles HD is exactly that, a collection of 12 different games, some are familiar and some are quite the opposite. 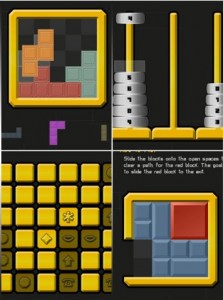 When the game starts up you have three choices; Brain Smashers, Brain Crunchers, or Brain Teasers. I’m fairly sure that Smashers are the hardest games, Teasers are the easiest, and Crunchers fall somewhere in between.

Just to let you know the names of the games are all over the place.  Some describe the type of game, others are just names. The best way to figure out which game is which is just to get in there and start playing.  Some of the games you might be familiar with are games like Memory Mix, which of course is the standard memory game. Another one is like the old picture game, where the picture is on eight moveable tiles and you have to slide them around to create the picture.  A few of the game involve weight, where you must you a scale to find either the heaviest game piece or the lightest game piece.  There is also a Tetris like game where you must fit a number of puzzle pieces into a certain shape. 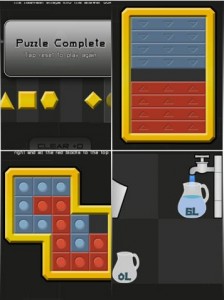 All of the games are a battle against the clock. The game does keep track of your fast times and displays it within every game. The controls are all touch-based with finger taps and slides. There really isn’t much of a learner curve; you should be able to pick this game up and start playing with full force immediately.

The graphical theme of Ancient Puzzles HD is that of hieroglyphic, giving the game an Egyptian feel. The music matches up well with the ancient theme during the menus but during gameplay turns into more of a fitting soundtrack for problem solving. 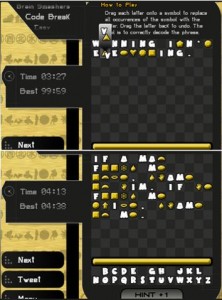 Although Ancient Puzzles HD has 12 different games to offer, once you’ve gone through them once the fun factor drops dramatically.  Certain puzzles don’t have the option of changing the difficulty so once you beat it you’re done with it. My biggest complaint would be lack of ongoing gameplay, which just so happens to be a pretty big complaint. There are other puzzle games out there for a little more money that will give you much more gameplay and even a little more variety.